One of Ireland’s two beef producer organisations (PO) has submitted documents to the Department of Agriculture, Food and the Marine to seek approval for protected geographical indication (PGI) status for ‘Natural Irish Beef’.

This new submission – made this week by Irish Beef Producers (IBP), which was formed last year as the first PO for the beef sector in Ireland – is completely separate from the Bord Bia PGI application that has been covered extensively by AgriLand in recent weeks.

PGI status is awarded, and protected, by the EU. A product with PGI status carries a label indicating this status when it is packaged for retail. Market research carried out globally indicates that these products generally attract a higher price.

In the documents submitted by IBP to the department, seen by AgriLand, the proposed PGI name of ‘Natural Irish Beef’ would include bulls, steers, heifers and cows that “have had a natural life cycle where the animal has been bred, born, suckled, weaned, grown and fattened in Ireland”.

As well as that, ‘Natural Irish Beef’ would come from animals whose sire and its dam’s sire are registered as belonging to one of the “main beef breeds in Ireland”.

These breeds are outlined in the documents as:

The ‘Natural Irish Beef’ product would include animals “no more than 42 months of age” at slaughter. According to the documents, this is based on the extent of ossification along the three areas of the backbone (sacral, lumbar and thoracic vertebrae) reflecting “the approximate maturity of the animal”.

The documents state that the qualifying carcasses would fall within fat class 3 or 4 and carcass conformation R, U or E of the EU Beef Carcass Classification Scheme grid.

Other key carcass criteria in this PGI submission include:

Prior to the finishing period, animals that would qualify for a proposed ‘Natural Irish Beef’ PGI would be fed on colostrum and whole milk from the cow; grass when at pasture (and hay, haylage or silage harvested in Ireland when not at pasture); and barley, wheat or oaten straw (harvested in Ireland) as a source of roughage.

During the finishing period, limited amounts of supplementary feed could be used, including: cereals/grains; root crops; peas; beans; soya; and rapeseed, all grown within Ireland.

According to the PGI documents, supplementary feed would only be used within the 120 days prior to slaughter, and the quantity of cereals fed must be limited to no more than 750kg on a fresh weight basis to “ensure that the omega-6 to omega-3 fatty acid ratio is close to optimal”.

Other key overall points in the PGI submission include: 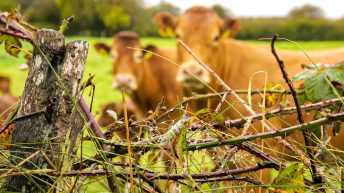