Pics: Herefords hot in demand in Tullamore as bids reach €5,000 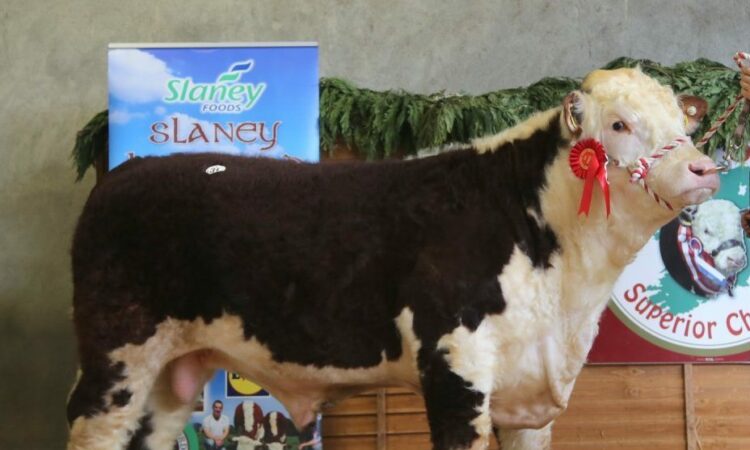 A total of 32 bulls were up for sale at the recent Premier Spring Show and Sale held by the Irish Hereford Breed Society on Saturday, March 31 last.

The event was held 10 days later than last year’s event, which may have benefited the sale – as wintry conditions continue to persist, with no growth and a scarcity of silage putting many farmers off purchasing a bull until conditions improve.

Circumstances had improved in comparison to last year’s sale with the clearance rate increased and a similar average of approximately €3,150.

A number of bulls were sold privately on farms and at the Kilkenny and Ballybay Multi Breed Sales, reducing the number of bulls present in Tullamore down from the 39 originally catalogued.

Champion on the day was Airhill Oconaill, owned by JJ Farrell, while the reserve champion’s ribbon went to Glaslough Sid, owned by Nigel Heatrick from Co. Monaghan.

David Larkin topped the sale for a second year in a row when his bull Cill Cormaic Prince 2 (see main image) secured €5,000; the animal was purchased by fellow Hereford breeder Wade McCrabbe from Co. Donegal.

Airhill Oconaill took home the Champion sash in the pre-show event when judge of the day Gerald Blandford, owner of the UK-based Bosa Hereford Herd, knocked him forward as the overall winner.

Bred by John Johnston from Co. Wexford, and bought by JJ Farrell (owner of Trillick Herefords) back in November 2016, this four star terminal sire was sold outside the ring for a sum of €4,250 – with John Bergin from Co. Laois becoming the new owner.

Frank Harrington from Co. Roscommon secured €3,700 for his bull F.H. Kingpin with David Dolan from Tullamore the winning bidder.

This double five star bull, out of the well-known Haven Kingpin, was attributed with having “excellent shape and tremendous length”.

Gageboro Rumpus, owned by Niall Daly and Lisa Holloway, was sold for €3,550 to Colm Conlon from Athlone.

This animal – another descendant of Haven Kingpin – was noted for “excellent shape” and proven bloodlines with great grand sires Churchill Storm and Trillick Best, along with four and five stars for terminal and replacement indexes respectively.

Padraig McGrath from Kye Herefords exhibited Kye Harry 753, a bull that is fertility tested, scored four stars for both terminal and replacement indexes and is sired by the well-proven Free Town Hotspur.

Kye Harry was purchased by Fergus Glennon from Mullingar Co. Westmeath for a sum of €3,500.

Finally, rounding off the top sellers at the show, David Larkin secured another €3,500 following the sale of his two-year-old bull Cill Cormaic Ocean to Michael Molloy, owner of the Moyclare Herd. 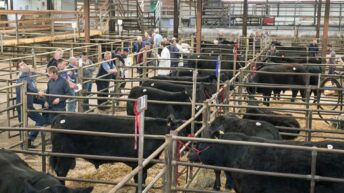 Angus on the up: Munster show and sale on next week