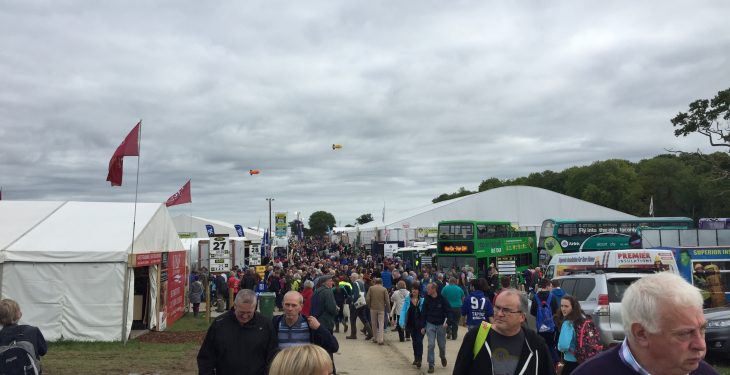 Thousands of people have made their way to the first day of the National Ploughing Championships in Screggan, Tullamore, Co. Offaly.

The day started off cloudy and it brightened up in the afternoon. Following rain at the weekend, there was plenty of muck around the 800ac site, meaning wellies were an essential!

President of Ireland, Michael D. Higgins, arrived early on site to wish the Ploughing competitors the best of luck before attending the official opening ceremony of the event.

Speaking at the event, President Higgins said that farming is a way of rural life.

Sustainability is the way forward, sustaining both the community as well as the hedgerows.

“Consumers must realise the real value of the quality and traceability of Irish produce, while farmers must be provided with clarity on important policies,” President Higgins said.

Meanwhile, ground conditions are variable with a few stony patches in places, according to Cork East ploughman, Dave Mulcahy.

The place is dry enough, considering the rain that fell here on Sunday I’m surprised the place is so dry.

“Conditions are variable, it’s a bit tricky in places where combines have left tracks in the field during the harvest.

“Weather conditions were difficult for the harvest this year and combines were probably brought into fields when they were still wet,” Mulcahy said.

Also in action today was Champion Sheep Shearer, Ivan Scott, who recently broke the world record after he shorn 867 lambs in nine hours.

Ground conditions are remaining reasonably good despite the huge volumes of traffic, with the weather staying dry but cloudy overhead, as Met Eireann forecast yesterday.

However, it remains very mucky around parts of this year’s Ploughing site.

The machinery is proving a big hit with youngsters, as kids climb aboard the newest additions belonging to Massey Ferguson, Fendt, Claas and Case IH to name a few.

The National Dairy Council tent was also very busy today as the arrival of Irish rugby internationals Rob and Dave Kearney had people rushing for photos and autographs.

Dairy products are an important part of the diet of any athlete, according to the Leinster and Ireland winger Dave Kearney.

“Dairy products are a great natural source of calcium and provide athletes with a great form of hydration after training,” the younger Kearney brother said.

I’ve been to the Ploughing before, it’s a seriously impressive set up and I’m just trying to take it all in. I’m looking forward to getting a chance to have a walk around around and visit the some of the stalls.