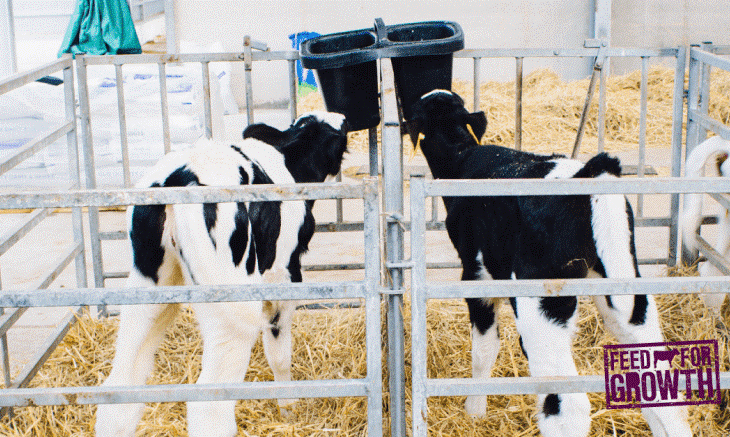 The dairy industry is starting to realise the fact that it may have been underfeeding calves for quite some time. But, the next step change will be driven by improvements in the quality of pre-weaning diets fed to the nation’s calves.

That’s the view of Volac nutritionist Ian Watson, who said the specialist young animal nutrition company is ready to meet the technical challenge.

“We know that feeding a good heifer calf up to 900g of milk replacer daily may be needed to meet optimum rearing targets and absolutely crucial if you want to calve heifers down at 24 months.

Watson pointed to studies which show that calves gaining 800g/day have the potential to produce 450L more milk during their first lactation, compared with calves reared on a traditional system gaining only about 500g/day.

“So, providing the necessary nutrition to sustain rapid growth rates (>750g per day) during the first two months of life should not only result in more efficient and economical heifer rearing, but also deliver greater lifetime milk output when these replacement animals join the milking herd,” he said.

If milk replacer intakes are restricted, he added, calves simply look for nutrition from the other feeds available and invariably this means eating more concentrates.

“However, this can limit early growth because the rumen is not developed to efficiently digest solid starter feeds until around four weeks of age,” he pointed out.

“Calves on a high-quality, precision-formulated milk replacer are receiving a highly-concentrated energy source; so much so that to achieve the same energy intake from a solid starter feed requires a dry matter intake 1.5 times that of the milk.

What’s more, further research has shown that there is a large amount of important early life development in the pre-weaned phase.

“The development of both mammary cells and the gut – and metabolic programming – all take place during this crucial early life period. So, feeding high levels of milk enables us to take full advantage. It’s also the time when feed conversion efficiency is at its highest.” Download Volac’s Farmer’s Guide on how much to feed the pre-weaned calf

The importance of feeding calves more milk has also been supported by recent research at Harper Adams University, albeit with male calves.

“The team at Harper noted that the calves fed higher levels of milk were healthier and had better faecal and coat bloom scores; concluding that this was possibly because their immune status was better.

“They have also stressed that – across all the calf trials they have done – calves recording lower daily liveweight gains never catch up, which really does highlight the importance of the industry capitalising on this highly-efficient early growth phase.”

Watson said that during cold weather, calves may need to be fed even more milk. He said: “When temperatures fall below 15°C, calves under three weeks of age need more feed to hit growth targets and boost immunity.

“Under mild weather conditions (15-25°C), for dairy calves to grow at an average of 750g/day in their first few weeks of life, they need to be fed at least 750g/day of milk replacer alongside dry feed and water. 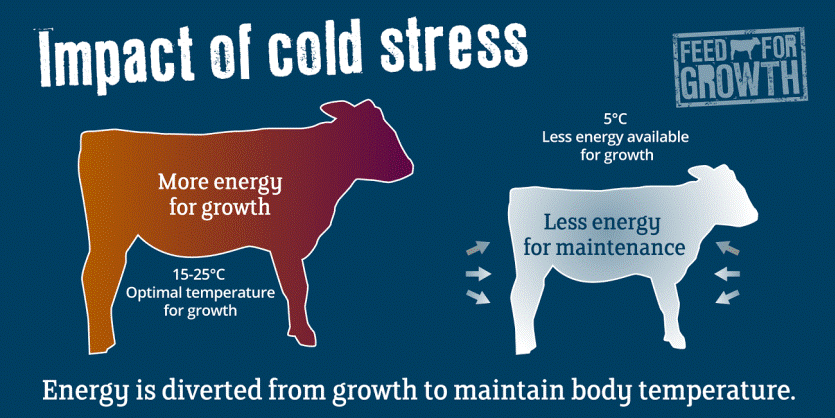 Watson stressed that it is vital that all newborn calves receive adequate good-quality colostrum (at least 3L within two hours of birth), whatever the ambient temperature.

“When it comes to milk feeding in cold weather, you really need to step up the level of milk solids by 100g/day for every 10°C temperature drop below 20°C,” he advised.

“This is best achieved by feeding milk more frequently and, in fact, this only mimics natural feeding behaviour when the weather gets colder.

“If given the choice, they will feed at least three times a day; if given free access to milk, possibly up to 10 times a day – drinking little and often.

Keeping bedding plentiful, clean and dry is also important. And, consider too the use of thermal calf jackets.

“By not taking measures to either keep calves warmer or increase nutrition during extended periods of cold weather, you could be compromising animal health through a reduced immune function and daily growth will also be reduced.

“And, it’s important to remember too to maintain good milk intakes even if calves are scouring,” he added.