Oireachtas committee to launch ‘future of beef’ report next week

A report into the future of the beef sector, produced by the Joint Oireachats Committee on Agriculture, Food and the Marine, will be officially launched next week on Tuesday, June 25.

The report, the full title of which is “The Future of the Beef Sector in the Context of Food Wise 2025′ will make a series of recommendations to “secure the beef sector’s future as a key player in the Irish agri-food industry’s predicted export growth.”

The report will be launched at Leinster House, and will be available on the Oireachtas website afterwards.

The committee has been examining the beef sector and Food Wise 2025 for several months, and a number of groups from across the industry have made contributions, including farm organisations and producer groups.

Yesterday, Thursday, June 20, at another Oireachtas committee, a number of details were revealed for the €100 million beef fund.

Brendan Gleeson, secretary general for the Department of Agriculture, Food and the Marine, was addressing the Public Accounts Committee, where he said: “It is called a temporary adjustment scheme, that’s what the [European Commission] are calling it.

The conditions include membership of an environmental scheme or membership of a quality assurance scheme. And then there’s a requirement imposed by the commission that we would have some kind of temporary reduction.

“[The commision] said ‘well, if you want this €50 million, one of the conditions must be some temporary adjustment in supply to address the market issue’,” Gleeson continued.

Quizzed by Fianna Fáil TD Bobby Aylward as to whether this scheme would mean a reduction in animals, Gleeson agreed that it could. 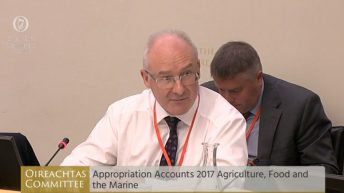