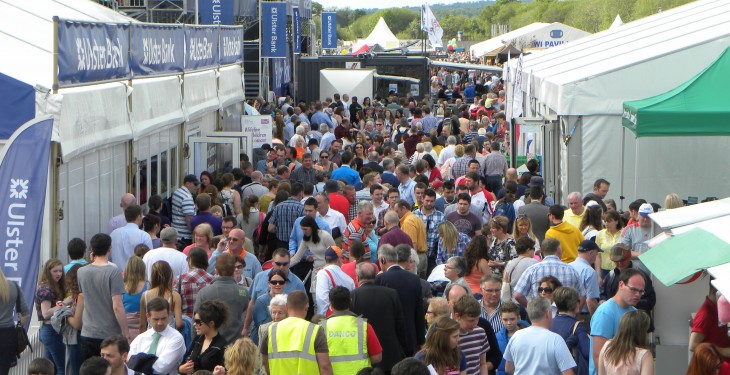 The decision to extend Balmoral Show into a fourth day was taken primarily to encourage more southern visitors to the event, according to Royal Ulster Agricultural Society (RUAS) Chief Executive Colin McDonald.

“This year will see the show run for four days, instead of three, with Saturday included as the new dimension to the event,” he said.

He added, “We are working from a firm base in this regard. Visitor patterns to our Winter Fair event are already confirming a significant increase in visitor numbers from the Republic of Ireland.”

Balmoral Show 2017 starts on Wednesday, May 10 and continues through until Saturday, May 13.

“We have a full catalogue of livestock competition events scheduled for the final day. This will include the new ‘champion of champions’ classes, which will see the champion animals across the dairy, beef and equine classes coming into the show ring together.

A well-known celebrity will help out with the judging on the day.

As McDonald confirmed that the parade of champions is moving from the Friday to the Saturday, he said that he is confident that there will be no drop-off in breeders and their stock, prior to the final day.

“I fully recognise the commitment expected of breeders to keep their animals in the showgrounds for four days. However, we have a number of arrangements in place, which should make life that little bit easier for them while they are on site.”

“The Eikon Centre is now fully operational,” he said.

“The pace of further investment at the Maze will be dictated by the uptake rate for the housing development now ongoing at the back of the previous King’s Hall site in Belfast.

“The sale of the new houses, now under construction, will generate the money required to fund the business plan for the Maze.”