National Beef Conference: What percentage of Irish herds have been exposed to IBR?

Infectious Bovine Rhinotracheitis (IBR) is a virus that spreads between cattle and can cause a number of problems, including: coughing; loss of appetite; nasal discharge; weight loss; and reduced milk production. In addition, IBR has also been linked to abortion.

The virus is spread mainly through direct contact with infected animals and can also be spread through the semen of infected bulls; airborne spread can also occur over distances of up to 5m.

Infection is widespread in Irish herds, with approximately 75% of both beef and dairy herds containing animals that have been exposed to IBR.

IBR was one of the diseases identified as a priority for Animal Health Ireland (AHI) and, speaking at today’s National Beef Conference in Tullamore, Dr. Maria Guelbenzu – AHI’s programme manager for BVD and IBR – outlined the pilot IBR programme which is currently under way on Irish suckler farms.

“This virus is like a cold sore in humans; once you get it, you’ll get it for life. Once an animal is infected, it will remain infected for life and – under stress – may start to shed the virus,” she said.

There are 30 herds involved in the programme with 30 trained vets. The pilot involves sampling and testing a proportion of the herd for IBR or what is called a ‘snapshot’.

“This involves 30 randomly selected samples from animals that are over nine months old; this is to avoid any interference with maternal antibodies. Samples are taken from animals used or intended for breeding,” she explained.

An on-farm risk assessment and management plan (VIBRAMP) is then carried out, followed by biosecurity and disease control advice.

The VIBRAMP consists of a questionnaire that outlines the farm structure, animal movements, biosecurity and vaccination history, with the vet and herd owner agreeing up to three changes to improve biosecurity.

“They are trying to find the areas where the farm could improve in order to maintain it free from IBR or trying to avoid the farm getting IBR,” she added.

To date, 25 herds have been tested and completed an IBR on-farm veterinary risk assessment and management plan, with between 15 and 44 samples/herd submitted.

“60% (15) had a negative snapshot; eight were fully negative and six had one seropositive result. The other 40% had more than two positives, but – in general – there wasn’t major amounts of seropositives.

“This is not necessarily representative of the whole beef industry, but it is certainly an interesting indication,” she added.

However, a large proportion of the seropositive results were from older, bought-in animals.

“We know that IBR occurs in herds through buying in animals; the more you move your animals, the more likely you are to have IBR.”

Touching on vaccination, she said: “If we don’t vaccinate our herd, we cannot control IBR. Vaccination works by stopping those animals reactivating the virus and the whole breeding herd must be vaccinated.

“However, vaccination will not completely prevent an infection coming into the farm.”

The programme manager also outlined that the information gathered from the pilot will be used to identify risk factors associated with the presence of infection, to identify common biosecurity risks and inform the decision on further testing and vaccination. 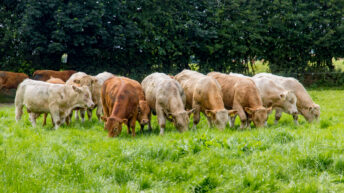