A politician in the UK has called for “serious consideration” of measures such as a meat tax in an address to the Oxford Farming Conference.

MP for Brighton and former leader of the UK Green Party Caroline Lucas called for the measure as part of her speech on “a radical new vision for British agriculture” earlier today (Friday, January 4).

Speaking to attendees at the conference, which is an annual gathering for UK farmers and representatives of the agri-food industry, Lucas said:

At the risk of incurring the wrath of the Energy Secretary in particular, who said recently that encouraging people to eat less meat would be ‘the worst sort of nanny state ever’, I’d add that we need serious consideration of measures like a meat tax – particularly for beef.

Continuing, the MP added: “I accept that British sheep farming is one of the least intensive forms of livestock farming so perhaps a banded system according to production method would help.”

She said that such measures could be offset for more sustainable meat producers through increased revenue from targeted agri-environment schemes.

“We need to recognise that diets are already shifting,” the MP said, claiming that one in eight people in the UK are vegetarian or vegan, while “a further 20% are so-called flexitarian”.

“Crucially, we need to bring the whole food chain into the circle of responsibility, not leaving farmers to work on their own, together with clear signals that society will play its part in funding this transition through a new agriculture policy.”

Lucas said that the Agricultural Bill should be legislating duties on ministers to support and guide such a transition, with adequate financial support from the Treasury needed to do this.

Mr. Gove promises only a temporary extension of the current agricultural budget – but what he does guarantee is tapering out of direct payments.

“But with well-directed and long-term support, including for example from water companies and other beneficiaries of fewer chemicals in the landscape, farmers could plan for a sustainable transition to more extensive systems, mirroring the pathway to renewables in the energy sector.”

To the extent that higher prices might be necessary, then welfare and minimum wage payments will also need to increase, the MP claimed.

“Keeping food artificially cheap cannot be allowed to be an excuse for continued environmental destruction and poor diets.” 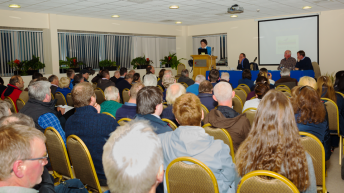