On Tuesday, it will become very wet and very windy during the afternoon as heavy rain pushes in from the Atlantic in gale force winds, according to Met Eireann.

It says this is from another powerful Atlantic storm (may be named Frank) out to the west of Ireland which may produce some damaging gusts over Ireland and further flooding.

Met Eireann is asking people to be aware also that there will be exceptionally high Atlantic waves along the north, west and south coast.

By Wednesday the storm center will have moved on to Iceland but the trailing front over Ireland will produce further spells of heavy rain.

According to latest projections, rainfall amounts between Monday and Wednesday will be in the 30 to 60mm range for many areas with more over the mountains. 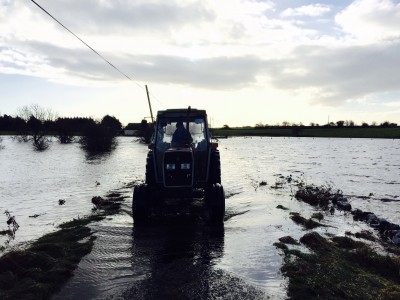 Meanwhile, it also says the further outlook for Thursday and the start of the new year is for a continuation of this changeable Atlantic regime with some potentially severe spells.

The insistent wet weather continues to cause significant damage to farm business across the country.

RTE today posted on its facebook page incredible footage of the damage done to one farm yard in Peterswell in South Galway.

Heavy rainfall has caused flooding around the country, including on this farmyard in Peterswell in south Galway

Thouands of acres of land are flooded across the country with many farm yards also under water. Many farmers have also seen significant amounts of fodder distroyed due to flooding.