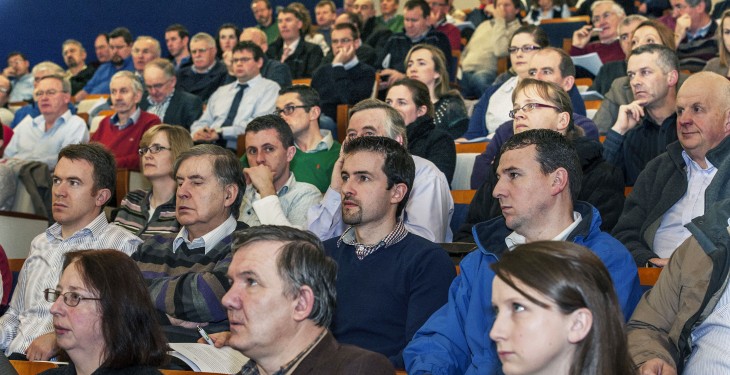 Improvements in milk quality and udder health are fundamental to retaining the competitive advantage of the dairy industry, especially in the manufacture of high-value dairy products, according to Teagasc’s Dr David Gleeson.

With this in mind, the objective of the Teagasc researcher’s study, which was presented at today’s Teagasc Milk Quality Conference, was to assess current trends in bulk tank milk quality between 2006 and 2011.

Some records from 11,444 farms representing 64 per cent of Irish dairy farms were used for analysis.

“Herds that sold the least amount of milk annually tended to have the highest SCC. The annual trend for TBC remained stagnant throughout years with TBC decreasing by 500 cfu/ml during the entire period.”

The report found a seasonal effect in monthly TBC where TBC increased during the early spring and winter periods (26,000 cfu/ml) and lowest during the summer period (18,000 cfu/ml).

Pictured were a section of the crowd at the Teagasc Moorepark Milk Quality Conference in the Horse & Jockey, Co Tipperary. Photo O’Gorman Photography