Meet the part-time farmer with over 700 dairy cows 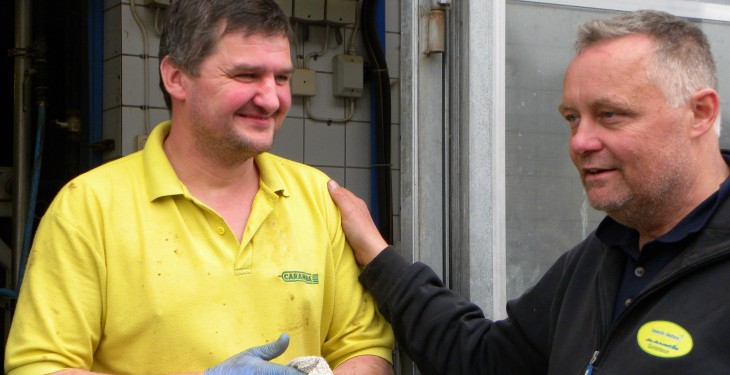 Lars-Inge Gunnarsson (r) with one of his employees

Swedish dairy farmer Lars Inge Gunnarsson has over 700 cows on his dairy farm in the Skane region of Sweden, but he’s only farming part time.

He started farming in 1982 with 90 cows and 35ha and today Gunnarsson also works as an electrician for the Swedish farmers union, the LRF and he is also the Chairman of Viking Genetics, as well as farming.

Four of his own children are employed on the farm and, according to Gunnarsson, they needed no convincing to work on the farm.

In total, the Swedish farmer employs 16 people on the farm; half of which are Polish and the other half Swedish. Three work in the dairy which produces 300t of cheese a year, with plans to grow it to 1,000t per year.

The cows on the farm are Holstein and Swedish Red & White Breed and each cow produces, on average, 10,900L/year. The 710 dairy cows are managed over nine holdings, with two of the farms milking three times a day.

The cows are fed twice a day with a mixture of grass silage and maize silage as well as grain. In total the farm supplies 7m litres of milk to Arla each year.

In total the farm has 2,340 cattle altogether; the farm buys bulls for fattening and each year delivers 1,000 animals to slaughter.

The Swedish farmer has 1,550ha of land to manage, which covers the dairy, meat production and energy production on the farm which also strives to be carbon-neutral.