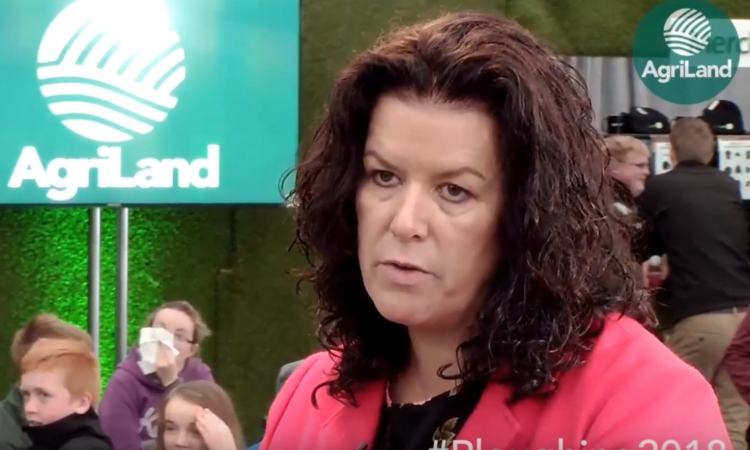 Following the postponement and eventual cancellation of day two of the National Ploughing Championships yesterday (Wednesday, September 19), Anna Marie McHugh said that everything possible was done to keep exhibitors and attendees in the loop regarding Storm Ali and its aftermath.

The cancellation of the ‘Ploughing’ day two was the first time the event has been stopped since the Foot and Mouth outbreak in 2001, when the championships were cancelled altogether.

Cancelled for one day this time round due to health and safety grounds resulting from Storm Ali, the assistant managing director of the National Ploughing Association (NPA) contended that everything was done using the information available at the time.

Describing the original concerns surrounding potentially stormy weather, McHugh explained: “I suppose it all really began a week or 10 days ago when the prospect of the storm coming was first mentioned.

We started to talk very closely to Met Eireann from about Wednesday or Thursday of last week and we’ve been in daily contact with them for updates.

And right through, we knew we were going to get some level of it – but the levels were going to be workable, we’d hoped, with the storm.

McHugh explained that weather reports for the storm earlier indicated that it would strike overnight, with the impact time varying as the weather system approached.

By Tuesday night, the organisations were aware that there would be gale winds, though these were still at regulatory levels at the time, with the highest concerns being about gusts of wind interfering with marquee doors.

So it was really because of the gusting, that was the highest risk and at that point we concluded that the best thing to do is delay the opening for a couple of hours. That was the last call; everyone agreed with that Tuesday night.

“But then it became more evident at 9:45am, 10:00am – that it wasn’t moving. Even at that point we didn’t have to depend on the forecasting, we moved on from that – because it should have been moving and it wasn’t – so it was actually the prolonging of the storm that was the issue.

Asked about the level of communication from the NPA throughout the storm and its aftermath, McHugh said that everything possible was done to keep exhibitors and visitors in the know.

“There’s a lot of media coverage saying that we didn’t communicate enough.

I would say we thought we were communicating as much as we could – we put out the notice on Tuesday night, and that went into the social media immediately and then we emailed all of the exhibitors as well.

There was no change in that message until 10:00am, McHugh noted, because people were warned not to come to the site before this.

Following the delay of an extra hour, to 12:00pm, no further delay was an option and the event had to be cancelled, the assistant managing director said.

And as soon as we had that information we put it out in the public arena; we sent the email to all the exhibitors that it was happening, and that’s all we could do.

“We were only safe to go into the site very shortly before we allowed the exhibitors in. So the information wasn’t there for the exhibitors, we would obviously have given – we weren’t holding any information back.”

“I initiated the communication and I didn’t have any more information to give. And I know that can be frustrating, but genuinely the reading from yesterday morning was very workable for the event and we were going with the 11:00am opening until later in the morning. So we couldn’t advise any further.”

Regarding exhibits that were damaged, McHugh explained that the NPA had to be very careful as it does not have the authority to go in on exhibits to take away debris.

“Exhibitors had to come to identify their own debris and deal with that because of the storm damage with insurance etc. But we had to make sure that the place was safe to permit people entry.”

Regarding communications with affected exhibitors, she said: “We would have heard through the media later that some of the exhibitors in the Blackwater got there before we told them but the gates were open so we couldn’t.

“That was going to cross over, because the alternative would have been to leave the event closed for a number of hours to make the assessment and to warn people – and that wasn’t an option.

Certainly for exhibitors that weren’t here immediately, and we did see damage, we started to make the phone calls.

Regarding the assertion yesterday by one affected exhibitor, CTS Security, McHugh said that efforts were made to contact everyone.

“My colleagues in the office had the full list of exhibitors in the Blackwater; I can’t say that everybody answered the phone, but the girls spent all afternoon contacting anyone that they could that they were seeing that had damage and made a lot of phone calls.”

McHugh said that the company would have been waiting to see the damage to its stand and got there before the NPA could get through to it.

Many of the exhibitors would have liked to have gotten in earlier or known, but we couldn’t permit. Safety had to be priority.

McHugh said that she had no regrets over decisions taken by the NPA and other organisations given the information they had at the time.

“We made the call on Tuesday night and the call was to delay and all the agencies were very satisfied with that. We were in agreement across the board because of the levels that were pending at that time. But things got worse.

“On a balance with something like this you’ve as many people calling for going ahead commercially – it’s so important for people to get their stands up and you’re trying to create a balance of the safety and doing the right thing for the exhibitors,” McHugh said. 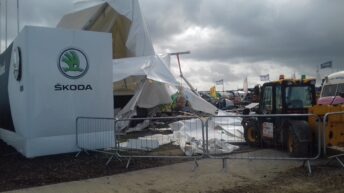