Mayo woman develops wool business off the back of her sheep

A Mayo woman has developed a wool business that is literally off the back of the sheep, tended on the small farm she runs with her husband.

June and Ken Bourke’s smallholding is in the village of Knappagh, 4km outside Westport.

“This is my homestead, and we came to live here three years ago after our son, Trevor, took over the family farm at Clogher, Westport,” she said.

It is a mixed farm, with suckler cows and sheep, including Texel, Suffolk and a few Jacob.

She learned to spin about 30 years ago, and spun as a hobby. 20 years ago, she started selling at local markets.

She then started the wool business ‘Back to Back’ – shearing, processing and spinning the wool on an Ashford wheel.

“I produce wool suitable for knitting, crochet and weaving,” said the Mayo woman who also knits hats, scarves and gloves with her wool.

“I get my wood shavings from Gary Leahy, a world famous maker of bows for fiddles and violins, who also lives near Westport.

“One of the woods is Permanbuca. It is from South America, where it is commonly called the music tree. I am delighted to get this as it is a good source of red dye, and Gary is happy to see the waste put to good use.”

Three years ago she and her f 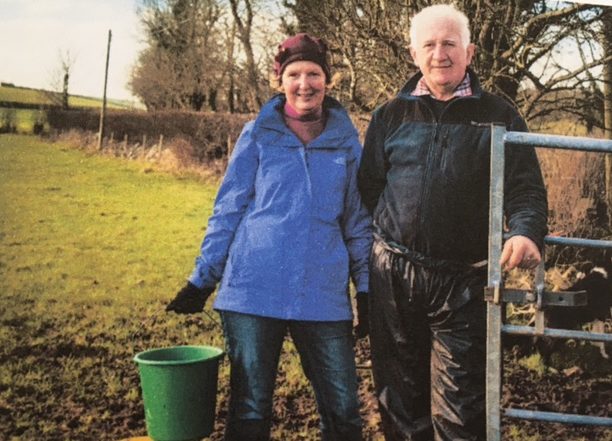 riend, Sheila Moran, set up The Craft House in Westport, where they sell her wool, along with other locally-made art and craft. “The wool has proven particularly popular with people holidaying in Westport,” she said.

The Bourkes also brought creativity to their four farm buildings, which are approximately 130 years old.

“During 2016, Ken restored the stone farm buildings. This was done under the Traditional Farm Buildings Scheme, which is administered by the Heritage Council of Ireland for farmers who are participating in REPS 4,” she said.

“Project manager Anna Meenan advised us, and was a tremendous help from beginning to end. Ken had previously restored the farmhouse, using traditional materials and methods, so he had all the skills in stone building and lime rendering.

“It was a lot of hard work but with lots of encouragement from Anna, it was finished on time,” she said.

One of the restored farm buildings is used for lambing and the wool processing.

In my spare time, I am developing the garden which backs onto our traditional farm buildings. The plan is to have it ready in 2018 to join the Clew Bay Garden Trail.

“This is another project, which I founded together with friends Mairead Bourke, Cormac Langan and Genie Keating. It is a series of private gardens, open to the public during summer months. It is all for charity and has raised an average of €10,000 per year for local charities.”