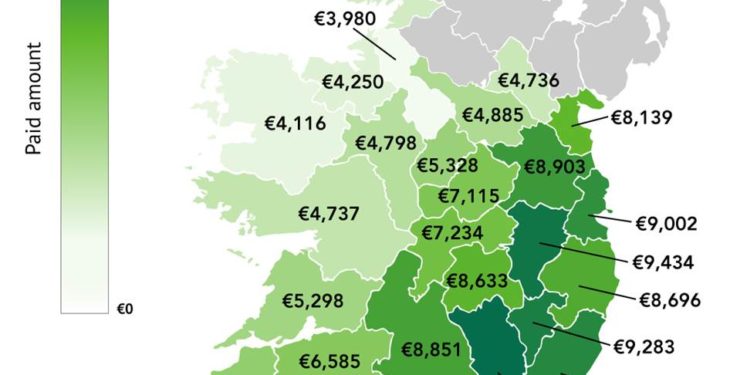 Farmers in Co. Waterford have received the highest on average advance payment under the 2017 Basic Payment Scheme (BPS) and the Greening payment, new figures reveal.

According to an official breakdown of the €700 million advance BPS payments, which started arriving in the bank accounts of 111,000 farmers last week, farmers in “The Deise” county received an average payment of  €9,957.

More than 90% of these vital support payments for eligible farmers have now been paid. The Department of Agriculture is continuing with regular pay runs as more cases are cleared.

Farmers in counties Dublin and Wexford secured approximately €9,000 each.

The Department of Agriculture figures show that farmers in counties Tipperary, Wicklow, Laois and Meath received between €8,500 and €9,000, while those in counties Cork and Louth gained between €8,000 and €8,500.

Midland farmers in counties Westmeath and Offaly received an average payment of around €7,200, while around €5,300 is estimated to have arrived in the bank accounts of farmers in Co. Longford.

In the south-west region, Limerick farmers grossed and average advance payment of about €6,500, Kerry farmers pocketed an estimated €5,700, while farmers in Co. Clare got an estimated €5,300.

An advance payment of between €4,500 and €5,000 was paid out to farmers in counties Cavan and Monaghan. 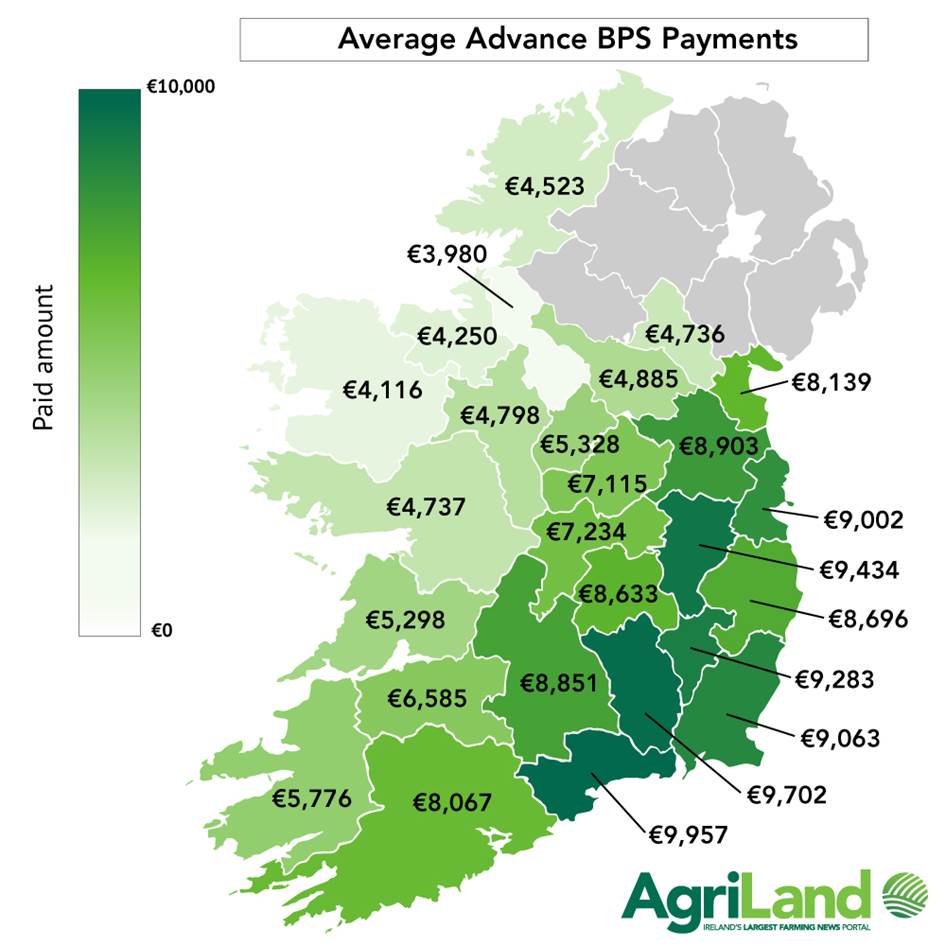 Farmers in the west and north-west region, including counties Mayo, Galway, Roscommon, Sligo and Donegal received an estimated advance BPS payment of between €4,000 and €4,800.

At the bottom end of the scale, farmers in Co. Leitrim received the lowest BPS advance payment of just below the €4,000 mark.

Confirming the commencement of the 70% advance in BPS payments last week, Minister for Agriculture Michael Creed said: “I am particularly pleased that these payments, worth some €700 million to 111,000 farmers, have now commenced issuing.

“Every year, the advance payment of the BPS is a vital support for farmers across sectors in terms of maximising cash-flow.  It is a priority for my department that these payments issue in the most efficient manner possible, and that they commence on the earliest date possible under EU regulations.”

Over 90% of eligible applicants for the BPS have now been paid in this first tranche. As we move to full online application by 2018, my department will be able to introduce further efficiencies into the processing of payments which will be of direct benefit to farmers.

Payments under the Areas of Natural Constraint Scheme (ANC) also continue to be issued as cases are cleared for payment.

“The advance BPS payment and the ANC payments taken together, mean that over €880 million has now been issued to Irish farmers in the last month.

“These payments provide a significant financial boost for individual farmers and the wider rural economy. I was delighted to secure an increase in the ANC scheme allocation for 2018. This €25 million increase will provide direct financial support to farmers in the most marginal areas of the country,” he added.