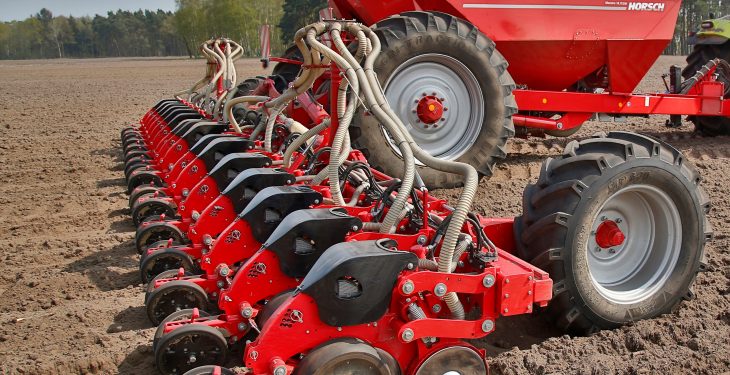 According to Horsch, drill operators typically set coulter pressure to suit their heaviest soil conditions, but research by the company shows that this can lead to “significantly increased compaction when moving into lighter soils”.

The 300kg-per-row unit coulter pressure on the Maestro maize drill is the highest in the industry, according to Horsch. This is ideal for heavy land, says the company, but the research conducted across Europe over the past three years has shown a more even seed germination when coulter pressure is reduced in lighter soils.

English-based Robert Tuckwell Contractors were one of the first in Europe to have the system fitted, when they took delivery of a new 12m Maestro 16 SW in 2016. Drilling more than 3,200 acres of maize to feed two local anaerobic digester plants, the new Maestro drill replaced an existing 8-row 6m machine.

“AutoForce was not a feature that we specified when choosing the Maestro and I was initially sceptical of its value,” said Scott Hosking, drill operator for Robert Tuckwell. “However, having worked with it for a season I would certainly specify it on my next drill.”

The system, which can also be specified as a one-section system for smaller machines, is claimed to maintain “accurate seed depth placement at higher speeds and offer greater control over the standard system”.

“We have a wide range of soil types to consider. We would often set the drill to suit a heavier soil, only to find the coulters would become buried on the lighter land,” explained Hosking. Horsch’s engineers experimented with the system’s response time during the season, allowing it to react to changes more rapidly.

“Now, with AutoForce in place, we can maintain our desired drilling depth of 2.5 to 3in far more easily and it has also allowed us to increase our speed too.

We run at about 8kph in heavy clay, pushing up to 12kph when seed-bed conditions allow, and all with a seed placement accuracy of 98% or above.

Covering 160 acres per day with the Maestro, the drill has reportedly improved the contractor’s logistics operations too.

“We can get about 120 acres of seed into the tank, which means we only need one top-up during the day. We have also moved to big-bag seed and big-bag micro-granular fertiliser which has further simplified operations,” added Hosking.