Lely predicts its Irish market will outgrow the UK by 2016 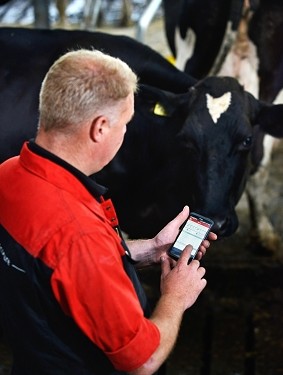 International machinery giant Lely predicts sales of its robotic milking machines in Ireland will outgrow its current sales in the UK market within the next three to five years.

This is according to its general manager in the UK and Ireland Andrew Stewart.

Speaking to AgriLand, he said: “We firmly believe that within three years, maximum five years Lely will be selling more robots in all of Ireland per year than we are are currently selling in the UK. In the UK we are doing 140 units this year.”

He said this will be driven by the abolition of milk quota system in Europe. “The Irish market is almost vertical. We are tripling sales year-on-year for the past three years.” In terms of robotic milking, Stewart said in essence it gives the farmer flexibility. “Flexibility on what he or she wants to do and when they want to do it.”

In terms of selling its products to the Irish market, he said technology is not an issue. “We are talking to the innovators, the progressive farmers. In the UK Lely is more mainstream as we are more mass market.”

Lely is set for the first ever live robotic milking demonstration at the National Ploughing Championships later this month. Its general manager said the company is looking forward to showcasing its latest innovations.

“Milking cows by robots has been done for 20 years. It’s not about the hardware, it is the software and the smart way to use it that counts” said Stewart.

“There is a lot of initiatives going on within our own team. There has been a lot of resources put into the Irish market in the past two to three years. We are getting a phenomenal number of inquiries at the moment and we are running numerous open days with average attendances at each in excess of 100 people. In terms of the range, we are selling intensive indoor systems in the North, more grass based systems in the south and to both full time and part time dairy farmers throughout the island of Ireland.”

Fallen said its smallest installation has been on a farm with 55 cows in southern Ireland. The owner had to decide whether to exit dairying completely and focus on his off farm job, or come up with a solution to allow him continue in dairying while having the freedom to continue with his off farm income. Naturally a single unit Lely Robotic milking machine was the ideal solution, he said.

The largest installation to date in southern Ireland is four robotic machines in county Meath on the farm of Pat and Michael Farrelly who initially installed two robots but have recently doubled the number to four on a grazing-based system.

Speaking about their system Fallon said: “They are very commercial farmers, running the farm very much as a business with a low-cost grass based system. They grow grass exceptionally, they know their costs down to a tee and their grassland management, in my opinion, is in the top 10 percent in the country.”

So how will Lely Ireland manage this expected growth and demand? “The sales of Lely automated milking are growing at a tremendous rate,” said Fallon. “The most important thing is the service and the backup. It’s crucial for us as Lely and the Lely Centres in Ireland to give correct level of service along the way in terms of technical service and farm management support and grassland management.”

In five years, Lely has expanded from one centre to five seperate hubs across Ireland offering a full sales and service network throughout the country.

Both the general manager and the sales manager were speaking at Lely’s latest product launch in its Yellow Revolution range, the Lely T4C InHerd farm management software system in Amsterdam.