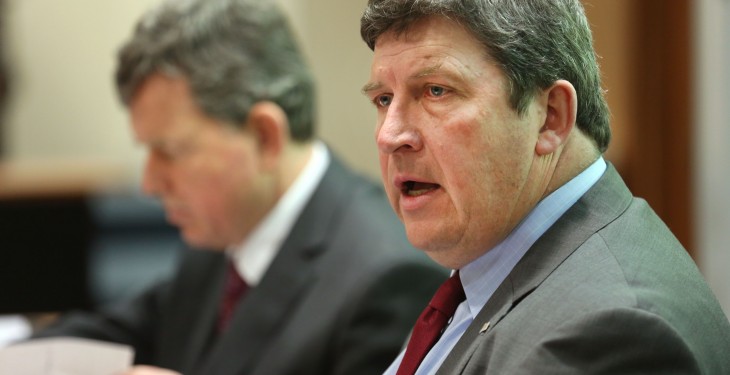 Both Kilkenny and Wicklow IFA held committee meetings last night (Thursday) in the wake of a report released by Con Lucey into the corporate structure of the organisation.

Galway IFA also met last night and returned a motion of no confidence in the Executive Board of IFA and its potential presidential candidate Michael Silke withdrew from the race.

On Tuesday, Con Lucey’s report was published by the IFA and it gave a detailed breakdown of the pay of the Presidents and Deputy Presidents of the organisation since 2009.

The report came in the wake of pay revelations in the country’s largest farming organisation which has seen the resignation of its President and General Secretary.Kilkenny members demand ‘en bloc’ resignation of IFA Executive Committee.

Members of the IFA’s Co Kilkenny Executive Committee backed two motions from the floor at a meeting held last night (Thursday): the first demands that the entire membership of the organisation’s Executive Committee step down with the second requesting that Jer Bergin steps down from his position as acting president.

“Both votes were taken as a show of hands. I will not be confirming the actual breakdown of the votes cast,” he said.

Bambrick said that copies of the Con Lucey report into the future governance of the IFA were distributed to the members in attendance.

“Many had not had the opportunity to view the report up to that point. And given these circumstances, no vote was taken on the recommendations contained within the Lucey document.”

Bambrick confirmed that a significant number of IFA members in the Kilkenny area want to see a clean sweep of the old guard at the helm of the organisation.

“There are many members of the IFA National Council who could be asked to constitute an acting presidential team until such times as the required elections are held.

“But, fundamentally, everyone wants to see a strong IFA retained as the voiced of Irish agriculture.”

Bambrick believes that elections to vote in a new presidential team should not be held until April or May of 2016.

“This will give prospective candidates an opportunity to meet the grassroots membership and explain their policy priorities in the detail that will be required.

“The General Election is another factor to be considered. Many IFA members may well be involved in canvassing activities during January and February. On that basis alone it would make sense to hold off the IFA presidential poll until the dust has settled on the selection of a new government.”

Limerick also calls for resignation of Exec Board

Limerick IFA also held a meeting of its Executive Committee last night with in the region of 150 farmers in attendance.

Aidan Gleeson, Limerick County Chairman said it called the meeting in the wake of the Con Lucey report.

“Our members are very angry at what went on. They feel for the good of the organisation that the board should have stepped down.

“We are still prevailing on them to step down and for a new board to be elected. We have sent up a resolution that the executive board considers their position again,” he said.

According to Gleeson, members were disappointed that there was a secret ballot taken at this week’s National Council on the position of the Executive Board and that the results of this ballot were not made known to the public.

The following motions were passed on the night:

“We had quite a bit of debate on the night but there was no vote taken in regards to the IFA’s Executive Boards’ position.

“It was decided to adjourn the meeting at 12 o’clock and we will meet again in late December or early January to take a vote on this issue,” he said.

However, he added that the level of anger among farmers in Co. Wicklow has grown since the report by Con Lucey was published on Tuesday (December 15).

“There was a huge amount of debate and anger from farmers, but the general consensus on the night is that we need to get the leadership of the IFA back on track as quickly as possible to deal with farmers issues.

“The IFA as an organisation has to stop beating itself up, but there is an undeniable amount of anger among farmers,” he stressed.

Furthermore, Shortt added that grassroots members of the IFA are beginning to engage with the organisation and the number of farmers attending meetings recently has increased.

“In the region of 12% of our members attended the meeting last night usually only 3-4% attend these meetings.

“It is becoming clear that there is an onus from the grassroots members to make sure we get things right within the IFA and it is beginning to be driven from the bottom up.”

He added that there was also anger on the night that a decision was taken on the position of the IFA Executive Board prior to farmers getting the opportunity to read Con Lucey’s report.