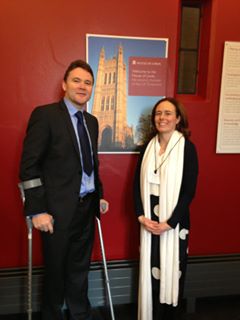 James and Emma Nolan in London for the awards ceremony.

Nolan’s butchers of Kilcullen, Co. Kildare has won the prestigious title of ‘Champion of Champions’ which was awarded in the House of Lords yesterday (Wednesday).

It was the only Irish business invited to compete in the Countryside Alliance Champion of Champions competition.

The Awards celebrate communities, produce, enterprise and rural heritage and, according to organisers, applaud those who routinely go the extra mile for their community and help to promote rural life.

Countryside Alliance invited the Champions from the past 10 years to compete for the title of Champion of Champions.

Over the past 10 years, it has had over 30,000 businesses nominated by the public for the prestigious Countryside Alliance awards.

Nolan’s of Kilcullen is the only Irish food business to have achieved the honour of being UK and Ireland Champion when it won the title in 2012 and was crowned the Champion of Champions at the event at the House of Lords.

James and Emma Nolan represented Nolan’s of Kilcullen and Ireland at the awards ceremony in the House of Lords, London.

James Nolan is the 4th generation of the Nolan family to run the business in Kilcullen, Co. Kildare.

It is a family business that was established back in 1886 and employs 25 people and manages to blend tradition and craftsmanship in the most modern of facilities in a most warm and welcoming shop.

It is located in the small village of Kilcullen in Co. Kildare, still retains a lot of the charm and tradition it possessed when it was first established back in 1886.

The award-winning store has its own EU-approved abattoir, boning hall, processing hall, curing facility and livestock just 200 meters from the store. This provides James with unrivalled control over everything from ‘farm to fork’.

All its beef comes from heifers from the Nolan farm or local farmers, and there is an approved traceability system in place.

Nolan’s make own home made sausages and black and white puddings fresh on site, from recipes that have been handed down from generation to generation.

It has won numerous awards at the Irish Craft Butchers competitions, and took home the coveted award of Best Butcher’s in the UK and Ireland from the House of Lords in 2012.