JCB receives largest ever shipment of machines to the US 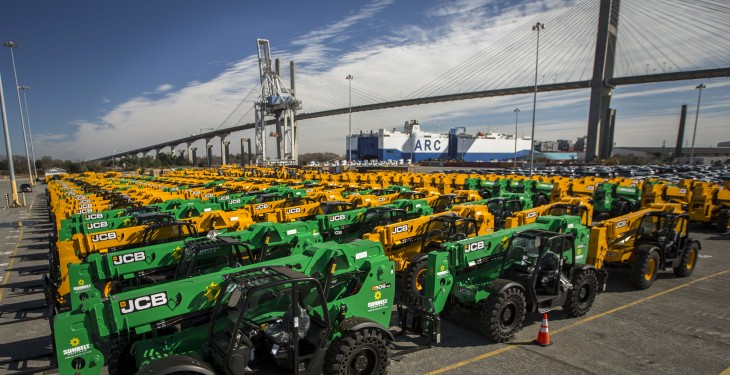 Some of the 341 JCB machines that landed in the US recently.

JCB has received its largest single vessel shipment of 341 machines to the Georgia Ports Authority from its machinery manufacturing facility in the UK.

“Despite the decline in many construction markets globally, the North American market remains buoyant with our core, end use markets growing by over 11% in 2014 We view 2015 as a critical ‘step change’ year in which we seek to accelerate growth in the US, Canadian and Mexican markets.

“Not only are we importing machines from the UK, we’re also producing a full range of skid steer loaders, compact track loaders and 3CX backhoe loaders right here in Savannah for global export via Georgia’s ports.”

Carrier Wallnius Wilhelmsen delivered the new machines on the vessel ‘Honor’ directly from England on January 19.

“As JCB celebrates 15 years of business in Savannah, shipments such as this continue to show our investment and dedication to growth in North America”, said Arjun Mirdha, President and Chief Executive Officer of JCB Inc.

“With partners such as the Georgia Ports Authority, JCB is able to continually use those investments to also support the local community.”

JCB manufacturers over 300 different machines from 22 plants on four continents including the UK, India, Brazil and the US.