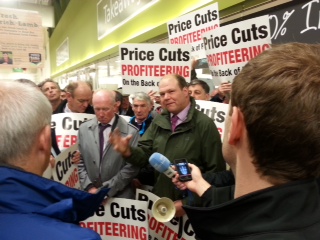 The IFA is accusing meat processors and supermarket retailers of profiteering on the back of livestock farmers in the ongoing dispute over beef and sheep prices, and it has vowed to escalate protests.


“The latest cuts to beef prices have generated deep anger among farmers, who see this as the main processors getting together with the retailers to push down the price paid to producers. This is coming at a time when our main market, the UK, is paying nearly €5/kg,” said IFA president John Byran.

IFA national livestock chairman Henry Burns said the factories have crossed the line with the latest price cut and he warned of repercussions. He said farmers will not let the factories undermine cattle prices further at a time when prices in Ireland’s main export market in the UK are the equivalent of €4.97/kg, and rising. He said the price gap with the UK is now at a €1/kg or up to €370 per animal, which he described as unprecedented.

In a statement to AgriLand, retailer SuperValu said it was disappointed at the IFA protests outside its store in Maynooth this afternoon.

“SuperValu is a proud supporter of the Irish food industry and the only retailer whose fresh meat is 100 per cent born, bred and reared in Ireland. It purchases €1.6bn worth of Irish goods produced or sold in Ireland every year, this includes €182m worth of Irish meat and poultry, helping to sustain 30,000 jobs in the farm, food and retail sectors.

The statement continued: “We are committed to supporting the Irish farming community and beyond our commercial support, also recently provided a €250,000 fund to support farmers during the fodder crisis in partnership with our suppliers Kepak and Oliver Carty.”

This story was updated at 6.54pm with a statement from SuperValu