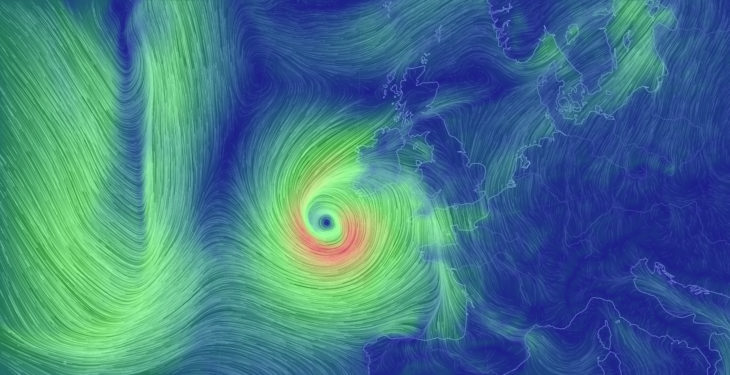 Farmers will continue to suffer the cost of extreme weather events, unless greater strides are made to reduce greenhouse gas emissions in agriculture, a leading climatologist has warned.

As farmers across the country grapple to re-roof sheds, salvage fodder, clear trees and milk without power, John Sweeney, professor (emeritus) of geography at Maynooth University, says the wrath of Hurricane Ophelia should serve as a wake-up call to Ireland’s “disappointing” action on climate change.

“Ophelia was a very rare event. But hurricanes are extending the areas of their influence and it’s not surprising when you think about the areas of warm water where it formed.

“It formed in an area of the Atlantic Ocean where the temperature was 2º warmer than normal, and therefore above the 26º threshold for hurricane formation. Without the ocean having warmed, it’s doubtful it would really have formed in that area,” Prof. Sweeney said.

He described the track of the hurricane, which tragically claimed the lives of three people – Clare O’Neill (58), Michael Pyke (31) and Fintan Goss, aged in his 30s – and left almost 400,000 people without electricity, as “unusual”.

“The track wasn’t towards the Caribbean and America, it was south north – which enabled it to maintain a lot of its hurricane characteristics. They only disappeared a few hours before it made landfall in Ireland.

Extremes that have only occurred very rarely in the past, may well be becoming more common. Monday’s extreme event, plus wetter winters, and the stormiest winters we’ve had in recent years, are all a sign post that we really need to be doing more to combat climate change for the sake of future generations.

The violent weather system also arrived just three days after the European Council of Environment Ministers – including Minister for Communications, Climate Action and Environment Denis Naughten – agreed a position of a 40% reduction in carbon emissions between now and 2030.

“I can express disappointment that Ireland is not pulling it’s weight internationally. At the negotiations in Luxembourg last week, far from being a leader on climate change, Ireland sheltered behind Latvians and the eastern Europeans. Where we are at the moment is very disappointing,” Prof. Sweeney added.

In 2009, Ireland signed up to a solemn obligation to reduce greenhouse gas emissions by 20% by 2020. However, today, Prof. Sweeney – a former president of An Taisce, the national trust for Ireland – projects that a reduction of no more than 4% will be achieved by that deadline.

“Ireland is out of kilter with virtually all of the other countries in Europe, most of whom have taken steps over the past decade to curtail their emissions in a variety of ways.

“The longer we put off taking steps to reduce our emissions the harder the fall will be, in terms of what is required to get down to the agreed level of 80% reduction by 2050,” he said.

He stresses that agriculture, which constitutes 33% of Ireland’s total greenhouse gas emissions, and the rise in transport emissions due to the upturn in the economy, are the leading culprits.

Agriculture is a major stumbling block in terms of trying to get those necessary reductions.  I think there is going to be increasing pressure on the farm and food industry  to actually play their role in helping to diminish emissions.

“Most of society pays a carbon tax at this stage; whether you drive your car, heat your house, you pay a certain proportion of the carbon emissions cost. But agriculture has not so far been brought into that category.”

As time goes on, Prof. Sweeney anticipates that this will lead to increasing resentment among the general public, particularly if the general tax payer is levied with heavy fines for not complying with the national obligation.

“There will be a ‘polluter pays’ principle coming up and the current estimates are that we will face €610 million in fines for the 2020 targets,” he said.

However, Prof. Sweeney – who describes himself as “very much an admirer of Irish farmers” – said farmers shouldn’t necessarily be burdened with all the costs.

“Farmers have had a very rough time in recent years. They’ve had difficulty with the milk price in the last two years, it’s now up comfortably in the 30-40c/L range – so things have improved considerably; but they’re still a sector of society, all 139,000 farms, which is not that particularly well off and we have to recognise that.

“The burden should be paid by the food companies as much as by individual farmers, because they are currently making very large profits from agricultural produce and my thoughts are that they should be the people we are targeting as much as farmers,” he said.

He said the cost of intensification, particularly in the dairy sector, should not be passed on to the average Irish citizen.

“We’ve seen a very large-scale increase in intensification taking place with the removal of the milk levy, and we have seen plans for intensification pushed through by the food industry and endorsed by government very quickly.

“A lot of that has already been achieved in 2017, so we are well on the way and it has implications for animal well-being, soil, water quality which I think have to be factored into the equation,” the professor explained.

Although agriculture is heavily contributing to the problem, Prof. Sweeney points out that agriculture will also suffer the ramifications.

“Climate change will affect agriculture in Ireland. It will render some of our high-yielding crops more susceptible to dry summer conditions in the future. It will favour certain crops moving westwards, grain crops for example, as there will be more moisture west of the Shannon.

“The real problems will come from dry summers – which are likely to come along with increasing frequency and that will have impacts on grass yields and potato yields in particular; extreme weather events will become increasingly common,” he said.

It’s a fairly one-track approach to more production, more intensification with often not much of an increase in the quality of the product.

“Marketing Ireland as a genuine sustainable agricultural country is what I think we should be doing. We’re making all sorts of green wash efforts to try to do this with Origin Green – it’s a marketing ploy which is being exported to other countries as far as I can see.”

However, he says farmers could partly address this issue by altering feed mix, changing the way they mange paddocks and by slurry management.

“Splash-plates for slurry should be banned quite quickly, we’re at the edge of what we can set in terms of ammonia emissions and so on,” the professor said.

“Spreading slurry is going to be a problem with wetter winters, in that the soil will be moister in the spring time than it is today.

There are things that can be done and I know that farmers will say that it will cost money, but at the end of the day a lot of these things will be banned down the road anyway – so it is worth grasping the nettle and doing it now in a more sustainable way at this stage.

“All of this is very important because agriculture has been given a very favoured position in the future emissions plans for Ireland. The Climate Action and Low Carbon Development Bill 2015 specifies that by mid-century we will have no more carbon emissions from energy production, transport or residences.

“We are already seeing houses being built with no chimneys and solar panels, we are already seeing electric cars make an imprint – so agriculture is getting 100% of the cake. It’s a very privileged position and I think it is incumbent on agriculture to realise that they hold the secret for Ireland’s future contribution on the international stage for tackling climate change.

“If Ireland is to act as a responsible citizen, then we have to take fairly radical steps to tackle where we are not delivering the goods in terms of emissions reductions,” he concluded. 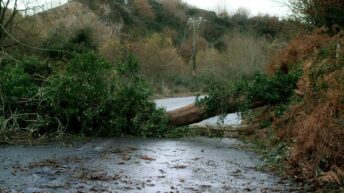 220,000 Irish homes and businesses without power as ex-hurricane Ophelia hits the UK