Hogan: ‘There must be additional support for Irish farmers’

The European Union will step up to the plate and support Ireland in the event of a damaging Brexit, European Commissioner for Agriculture and Rural Development Phil Hogan has said.

Commissioner Hogan said: “There is no doubt that Brexit is the single most disruptive shock to Irish trade in this or arguably any generation.”

The commissioner welcomed the news that the UK has ruled out a no-deal departure; he acknowledged an “accidental no-deal” is still possible but said that “no-deal will no longer be used as negotiating leverage”.

“The reality is that you can ignore 99% of the howling in Westminster which, to be perfectly honest, is becoming an embarrassment at this point and a stain on the UK’s standing in the world.

We need to stay calm and not react to the UK’s tariff statement published during the week. This was a political stunt, pure and simple, designed to change the news cycle in the UK and weaken the unity of the EU 26 in relation to the Irish backstop.

The commissioner moved to assure Irish farmers that the EU’s resolve will not buckle, adding that the union’s solidarity behind Ireland “remains rock solid, steadfast and unwavering”, with institutions currently planning ahead for all outcomes of the UK’s departure.

“My services in DG Agri and experts across the European Commission have been working tirelessly to put preparations in place for all possible Brexit outcomes, and Ireland has been the absolute priority in their minds.

“Today DG Agri will launch an online portal to highlight in detail all the work that has gone into Brexit preparedness.

This will be a very useful port of call for farmers and agri-food operators who want to find out more about the EU supports available.

Commissioner Hogan added that there is recognition across the EU of the vulnerability of Ireland, particularly the beef sector, to Brexit, noting that there must be additional support available for Irish farmers.

“My services are making good progress on putting structures in place for transport and logistics, SPS issues, customs checks and all related challenges.”

The commissioner outlined what supports are being implemented.

In spite of the financial challenges arising from Brexit and the consequent loss of €12 billion from the EU budget, I am guaranteeing you no change in direct payments to Irish farmers in 2019.

He added that state aid support, additional promotion measures and additional market measures will all be made available to help Ireland.

“The commission’s historical commitment is that ‘no individual member state will suffer disproportionately’ in a time of crisis and that certainly applies to Ireland today,” the commissioner said. 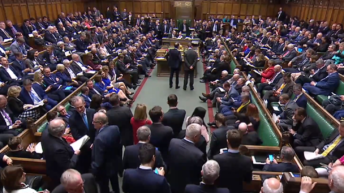