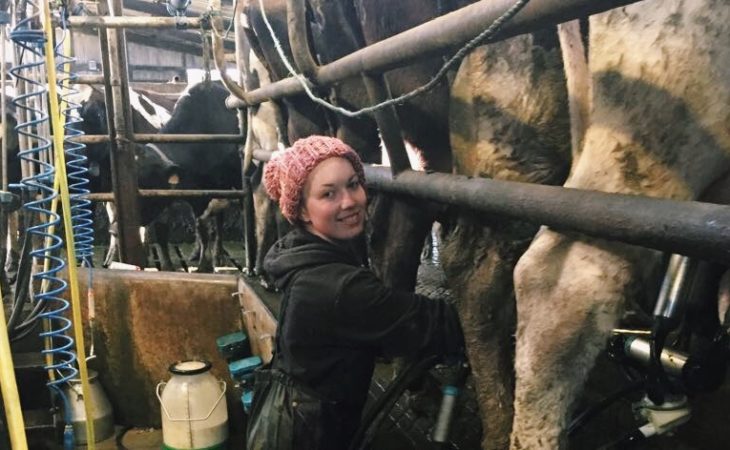 Everyone should have at least one person to whom they can turn when the going gets tough.

That’s the belief of 25-year-old farm manager, Laura Cable, who recently went from working with a 1,500 dairy herd in New Zealand to running a dairy farm in Clonakilty, Co. Cork.

The Yorkshire native met her boyfriend, John Forbes from Dunmanway, while in New Zealand. In September 2017, she took over the running of the 130 cow farm where he spent his summers, after he returned to UCD for his final year studies in dairy business.

She quickly settled into managing the herd which comprises mainly of Jersey and Friesian crosses. Having grown up on a beef and sheep farm, and won a scholarship to work in New Zealand, she was well-aware of the challenges of farming.

However, her Irish experience has been additionally testing as it has involved three weather warnings. She gave an insight into her work when she recently managed the Irish Farmers’ Twitter page.

Anxiety was one of the topics that she touched on – and it resonated with many in the farming community.

I think I’ve always had it; but I never really knew what it was or how to get a handle on it. Very few people know that I suffer because I’ve never felt people needed to know.

“I have four people who I can confide in and who can tell if I’m struggling. It tends to arise when I’m uncertain about things or the future.

“This makes it extremely difficult in farming because so much is unpredictable – for example the weather,” she said.

I think its important that everyone should have at least one person they can turn to and say: ‘I’m finding things hard.’

“It’s nothing to be ashamed of at all and that person can look out for you in times when you might not be able to yourself,” said Laura.

If you really don’t feel you can turn to someone you know, Laura highlights that there are helplines and charities just a few buttons away.

She has also spoken about rural isolation.

“When I first moved to Ireland I only really knew a handful of people. With my boyfriend at college during the week, I was spending a lot of time alone. I think I’m at an age where it’s difficult to meet people.

“I’m not at school to meet people my own age. I don’t have kids to meet other parents and I don’t play any sports to join a team,” she said.

She decided to join a local Macra club.

“I might only go out with them a couple of times a month; but it’s familiar faces and a change of scenery from the farm.

“There are a lot of like-minded people in the club that might be farming at home and need to get away from the farm for a bit,” she said.

While farming can be a lonely profession, Laura contends that this doesn’t put too many young people off the profession.

“It’s one of those careers that you know you want to pursue regardless; it does take up a lot of your time anyway. I’m not saying that’s an excuse to work all the hours God sends and not socialise because that’s an extremely slippery slope,” she said.

She says this past winter has been particularly long and difficult.

“It has presented its challenges in the way of Hurricane Ophelia and Storm Emma; but like with any challenge, you get over it and make the best of a bad situation,” she said.

Trying to have a social life as a young person in rural Ireland is no easy feat either. If we want to go into town for a few drinks, someone has to avoid alcohol or plan well in advance to get home as taxis are fairly scarce.

“Similarly if I didn’t drive or have a car, I would be very limited on what I could do or where I could live as public transport is pretty much non-existent as well,” she said.

Although farming in Ireland may be male dominated; Laura sees more women going into the area.

“I think the attention that we get – good or bad – is just driving that ambition even harder. I hate to be told I can’t do something because I’m female. That seldom happens; but the general attitude to women working or running farms is still a sense of shock,” she said.

Only once has someone stepped onto my farm and asked to see the boss – he didn’t ask again.

“I don’t feel like I’m doing anything special. This is my day-to-day life and I love what I do; but I suppose it’s nice to be recognised and appreciated,” she said.

“I think women can offer more to the role. Personally, I feel I’m more sentimental and empathise with the animals. I know I still have to produce the goods and make a profit; but you can still do that while having excellent stock skills,” she said.

Laura’s New Zealand farming experience has left her with various takeaways – particularly around efficiency, simplicity of systems and financial implications.

“The Kiwis operate such simple systems and get the job done as quickly and as easily as possible.

“I guess that’s what I’ve implemented over here. Especially as I work on my own a lot of the time. I have to manage my time effectively in order to get everything done; but also keeping the financial implication of what I’m doing at the back of my mind.

“There’s ways and means to achieving maximum efficiency; but then there’s cutting corners which will catch you out in the long run,” she said.

She believes Ireland is working towards achieving the efficiency of the Kiwis.

“This spring has served as a harsh reminder that this is not New Zealand; and that we have our own challenges to overcome.

“New Zealand farmers can’t keep their cows inside longer in a poorer spring; and so we are lucky in that sense that we can fall back on these systems,” she said.

So what of the future?

“My future is an open book at the moment. If you had asked me five years ago where I would be now, the answer definitely wouldn’t have been managing a dairy farm in rural Ireland anyway.

“My family are farming and running butchers shops in England; but I have very little desire to return there permanently.

“I absolutely love my job and the people I work with and I’m in such a beautiful area; it wouldn’t be an easy decision to leave. However, I have got itchy feet to see another part of the world so we’ll have to see. But for now I’ll manage away my little herd,” she said. 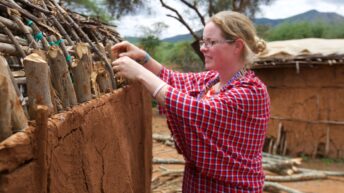