Glanbia has become the latest processor to announce its milk price for November.

The company will pay its member milk suppliers 32c/L including VAT for November manufacturing milk supplies at 3.6% butterfat and 3.3% protein.

This is unchanged from the October price for co-operative members.

Glanbia Ireland has reduced its base milk price for November to 30c/L including VAT, for manufacturing milk at 3.6% fat and 3.3% protein. In addition, Glanbia Co-op will make a support payment to members of 2c/L including VAT.

The Glanbia Ireland base price and the Glanbia Co-op support payment will be adjusted to reflect the actual constituents of milk delivered by suppliers.

Commenting on the move, Glanbia chairman Martin Keane said: “As highlighted in recent months, there has been a significant reduction in dairy market returns, particularly for butterfat, which we must reflect in the base milk price.

“Brexit developments and international trade uncertainty, offset to some extent by reduced intervention stocks and potentially lower milk volumes from key EU regions, are among the factors that will influence dairy markets in the coming months.

The board will continue to monitor developments on a monthly basis.”

Earlier this week Lakeland Dairies announced that its suppliers will be paid 32.06c/L including VAT and a lactose bonus for their November milk supplies.

Meanwhile, Kerry announced an unchanged milk price of 32c/L including VAT for November. 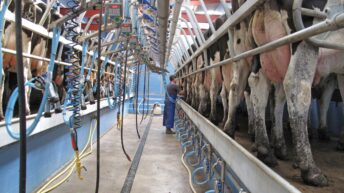