Virginia International Logistics – based in Co. Cavan – has become the first haulier in Ireland to complete a zero-carbon Heavy Goods Vehicle (HGV) delivery to Europe.

The trucks used for the journey were fuelled by renewable gas and were transporting Irish beef to the continent.

The first European load was a consignment of processed beef from Liffey Meats in Ballyjamesduff, Co. Cavan, going to Caen in Northern France. The total round-trip is 1,121km.

According to a statement from Gas Networks Ireland (GNI): “The Irish commercial transport fleet makes up just 3% of vehicles on the road, yet is responsible for approximately a fifth of transport’s carbon emissions.”

Commenting on the trucks’ maiden voyage, Liffey Meats’ environmental manager, Andrew O’Brien, said: “At Liffey Meats, our green ethos is what drives our company in the way we produce our food.

Sustainability is an integral part of all decision-making processes here onsite.

“In addition to the electricity we generate from our own onsite wind turbine, we are also sourcing 100% renewable electricity from our providers Naturgy.

As members of Bord Bia’s Origin Green program, we believe we have a responsibility to inspire others to create a sustainable tomorrow.

Concluding, the environmental manager said: “This is a landmark for both Liffey Meats and Virginia Transport as it is the first delivery of our quality-Irish beef using biogas as the transport fuel.” 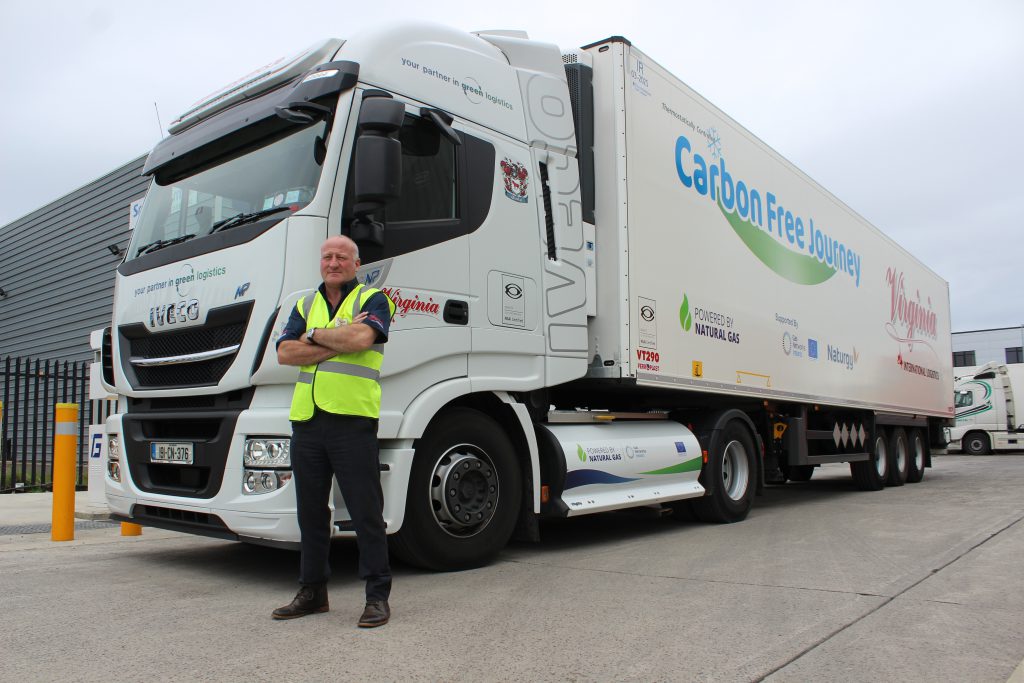 “We are proud to be able to deliver for Liffey Meats and other customers in the most sustainable way by offering zero-carbon shipping in Ireland, the UK and onto the continent.”

Also commenting on the cargo, Ian O’Flynn, head of commercial and corporate affairs, GNI, said: “GNI is leading the development of this new, cleaner transport network, to support Ireland in reducing its carbon emissions and to give Ireland’s fleet operators sustainable energy options.”

The statement noted: “Switching to natural gas can reduce a HGV’s emissions by up to 22%.

“By using renewable gas in the same vehicle, the carbon emissions are eliminated.

“There is significant potential to produce indigenous renewable gas in Ireland at a lower cost,” the statement outlined.

In 2012, Virginia International Logistics invested in dual-fuel vehicles and last year, it made the switch to Compressed Natural Gas (CNG).

By December of this year, it is aiming to have 30 low carbon CNG trucks on its fleet. All of these trucks can run on renewable gas.

The expansion of the Virginia Transport fleet and the installation of the re-fuelling technology is supported by GNI.

A further six public stations are in planning and development.

How can Irish grassland farmers tap in on a 'green oil' boom?