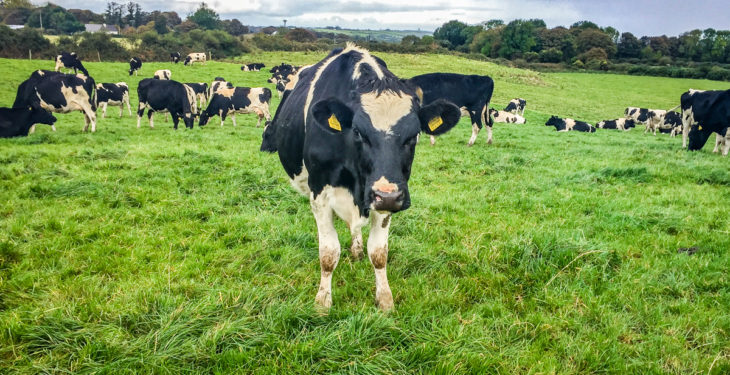 Unhappy with the performance of their dairy farm, in terms of grass growth and reproductive performance, Brian and Pamela Conlon joined the Aurivo Farm Profitability Programme in 2014.

This programme is being coordinated by Dr. Roberta McDonald; it aims to increase output on farms, improve farm efficiencies and result in greater profitability for the farmers involved.

The Conlons were just one of the six participants involved in phase one of the programme. Earlier this week, the husband-and-wife team opened the gates of their Co. Sligo holding to highlight some of the improvements made over the past three years.

Farming just outside Templeboy, Co. Sligo, the Conlons are currently milk a herd of 80 predominately British Friesian cows under a spring-calving system. Last year, the average cow in the herd produced 5,100L at 4.21% fat and 3.5% protein.

Along with striving to meet the programme’s objectives, the Conlons aimed to create a more streamlined system of farming to allow for a “good work-life balance”.

Over the duration of the programme, they have made many changes to their farm. These include: reseeding; fertiliser planning; new grazing infrastructure; an increased focus on heifer rearing; and an improved six-week calving rate.

Looking back to 2015, the Sligo-based farm grew just 7.9t/ha of grass. However, this has dramatically increased and the farm is on target to grow close to 14t/ha this year.

There were many changes made to facilitate this increase. Firstly, 20 soil samples were taken from the grazing block in an effort to improve soil fertility – the backbone to effective grassland management.

The results showed that 93% of the samples had a pH of below six; just one of the samples achieved a pH score above six. On the back of these results, lime is now spread at a rate of 2t/ac every four years. 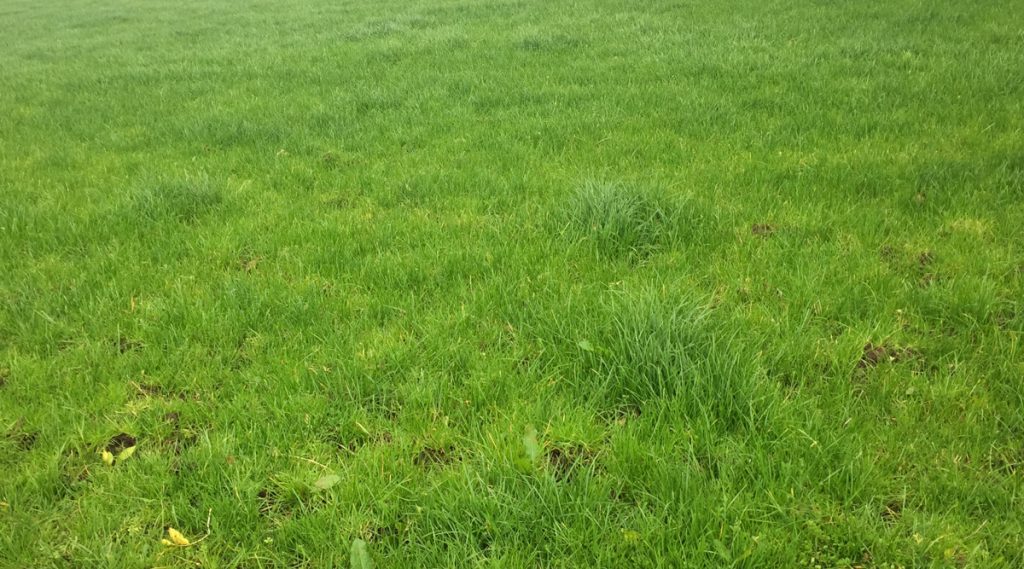 The soil sample results also showed that 90% of the grazing block was index 1 for phosphorous (P); there were no index 2 soils and just 10% were index 3.

Given these results, a strict fertiliser programme is now in place and 100 units of urea are applied to the grazing block before May 1.

23 units of urea are applied between January 15 and 30; a further 46 units are spread by March 1 – resulting in 70 units of nitrogen being applied by April 1.

Brian Conlon commented: “At the start of the programme, I was apprehensive with the high-nitrogen input so early in the year, when ground temperatures were low.

“However, it has resulted in a greener sward which achieves a better clean-out when grazed.”

30-40 units of nitrogen are applied before the last grazing – leaving four-to-five weeks of grazing ahead – setting the farm up nicely for next spring.

Cian Devaney, the Conlons’ local Teagasc advisor, said: “By missing one of the four requirements – be it lime, phosphorous, potassium or nitrogen – it’s impossible to utilise grass to the full extent. To grow 14t/ha in a year, 25 units of P must be applied.

The Conlons aim to turn cows out to grass between February 10 and February 15 every year. They also target to have 30% of the milking platform grazed by March 1 and the entire area grazed by April 15.

Speaking on spring grazing, Conlon said: “It’s up to the farmer’s discretion; he/she must know the capabilities of their land. It’s vital not to run out of grass by the first two weeks of April.” 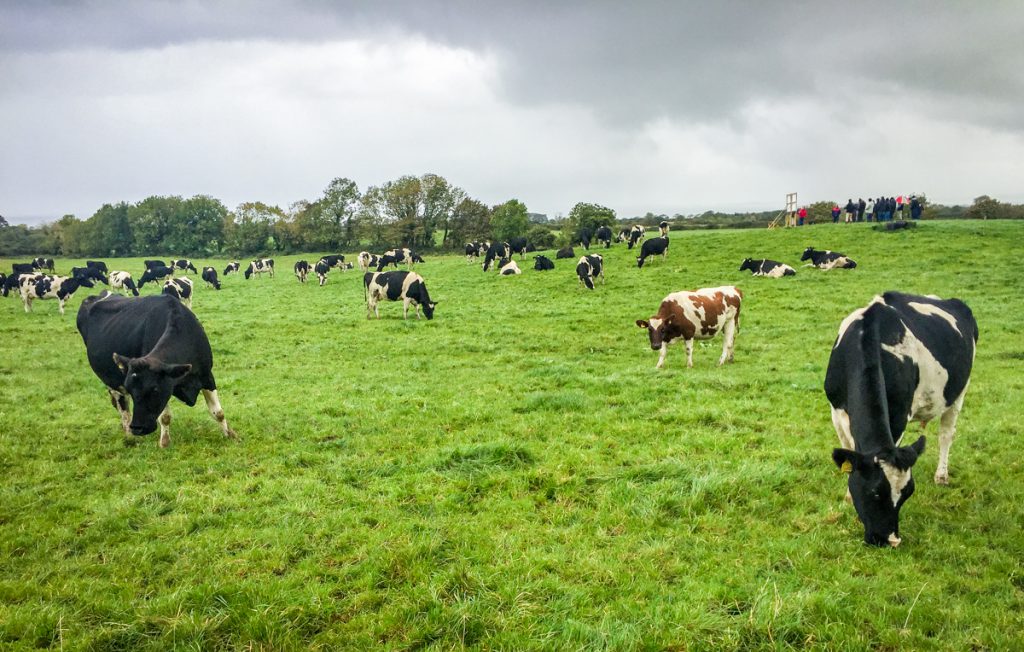 In addition, the farm also operates an autumn rotation planner. This ensures better clean-outs late in the season, resulting in good-quality grass being available next spring.

The husband-and-wife team hope to have 70% of the block grazed by November 1; depending on the weather, the remainder will be grazed throughout the rest of November.

A reseeding programme has also been put in place on the farm. Over the last three years, 30% of the milking platform has been reseeded. As a result, sluggish, older grasses have been gradually replaced with newer, high-yielding varieties.

Conlon stated: “While it is important to have ryegrass present in the sward, late intermediate tetraploids have worked well here. Currently, we have got nine grazings from one paddock and maybe another one, weather depending.”

This year, half of the farm has been cut for top-quality surplus bales (335).

“These bales play a vital role in our system; we are in a high-rainfall area and the overall picture can change overnight,” he added.

2012 proved to be a learning curve for the Conlon family, as 65% of cows calved in a six-week period. Poor calf rearing facilities and an extended calving window led to an increased and prolonged workload for the husband-and-wife team.

However, in the last three years this has changed. The Conlons are now experiencing a busier but shorter period of calving.

This comes from a tight six-week calving period, which has been achieved by a strict 12-week breeding policy. 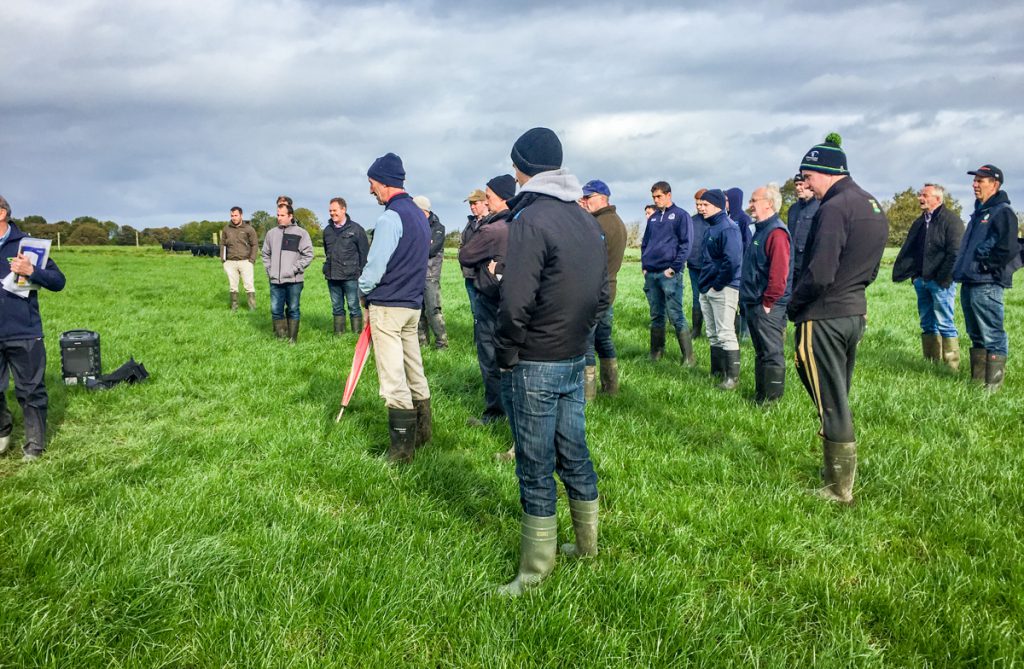 According to Conlon: “In 2012, the average age of the herd was too old. It’s very important to keep the replacements coming through.

The hardest thing I found was saying goodbye to the cows that calved in May. However, when you calculate what they missed from mid-February to mid-May – that figure could be close to 1,800-2,000L/cow.

Over the three years, the Conlons improved their calving facilities and moved calving from January 18 to February 1.

The Conlons also sorted out fertility issues by condition scoring and observing their cows at regular intervals during the breeding season.

Currently operating on a 9% empty rate (88 scanned in-calf for 2018), the herd has already been body condition scored – with an average score of 3.1. Thin cows, in three-to-four weeks, will go back to once-a-day milking and will be dried off earlier, he said.

Bull selection was critical to this – easy-calving traits allowed for less attention to be required at calving. Also, breeding better young stock is a prime target for the family. 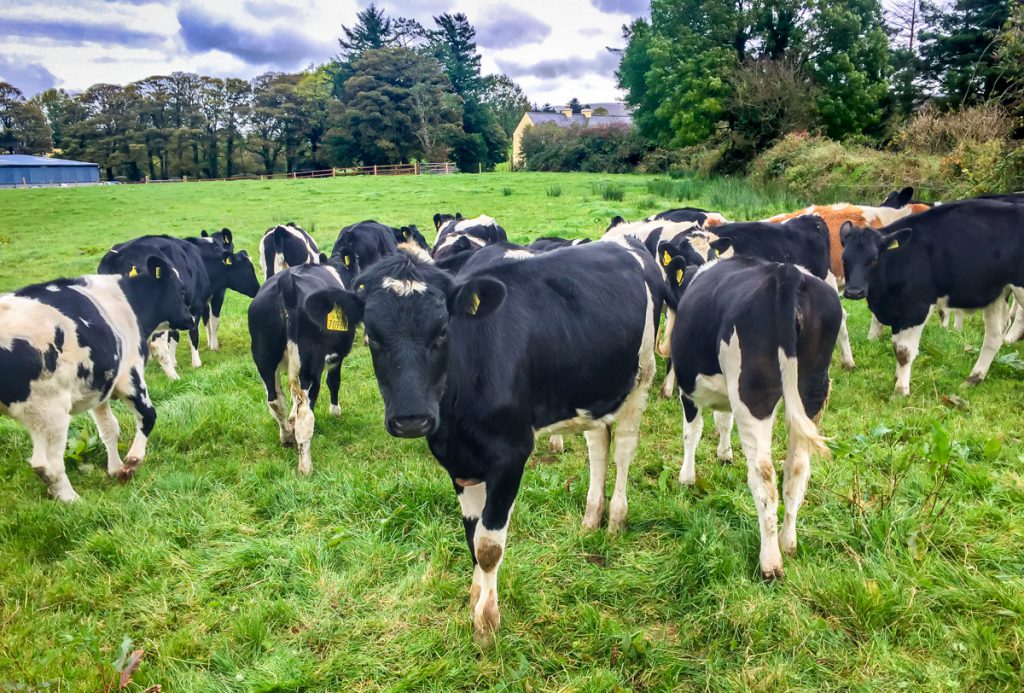 Conlon stated: “I find it easier to manage a smaller herd and get the basics right. It really is down to genetics and sticking to high-fertility and high milk solids traits through the EBI.”

Along with the substantial reseeding programme and strict grassland management, the Conlons have invested in roadways and water systems.

In the last three years, we have put in 350m of permanent roadways and 100m of spur roads. It’s usually in the spring time that this investment comes in handy.

“We’re in a high-rainfall area, so it comes in handy in the autumn too – they are a necessity for getting grass into cows”, he said. 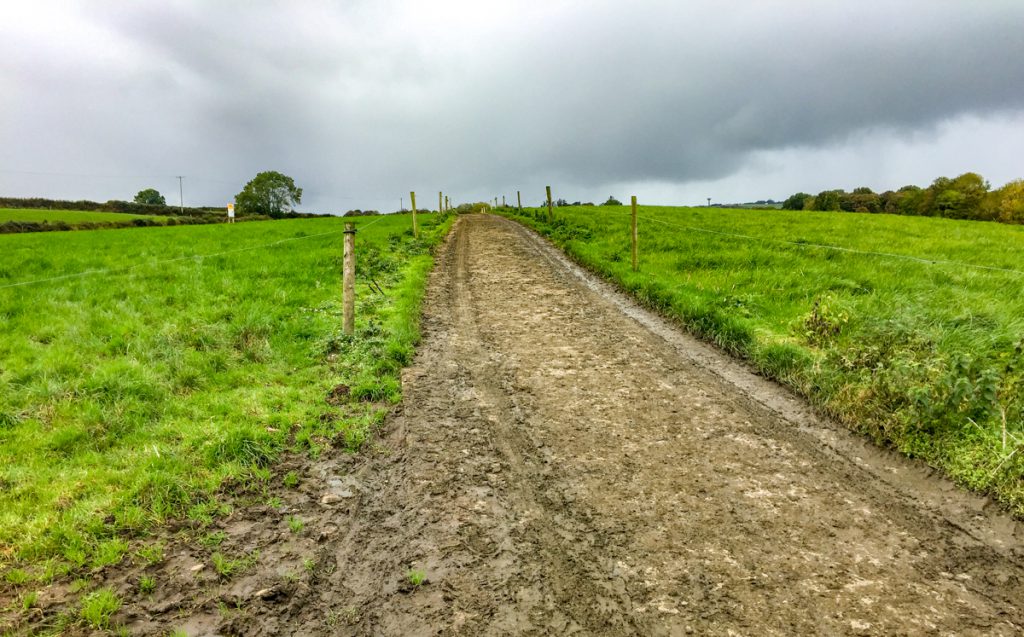 10 160-gallon concrete troughs have been added since the programme started, mostly on the paddocks furthest away from the parlour.

Just to maintain the platform alone, we are spending €3,000-€4,000/year. There is always a corner that needs a shore or a drain that needs to be cleaned, so we get the digger in for a week every year.

A quarry located on the farm provides the rough stone for the base of the roads, which is a big help on costs, he added.

With the addition of new roadways and water troughs, the Conlons have also upgraded the accommodation and slurry storage on the farm.

An additional 40 cubicles have been added, bringing the number of cubicles available to 78. A new feed barrier has also been installed to increase feed space. 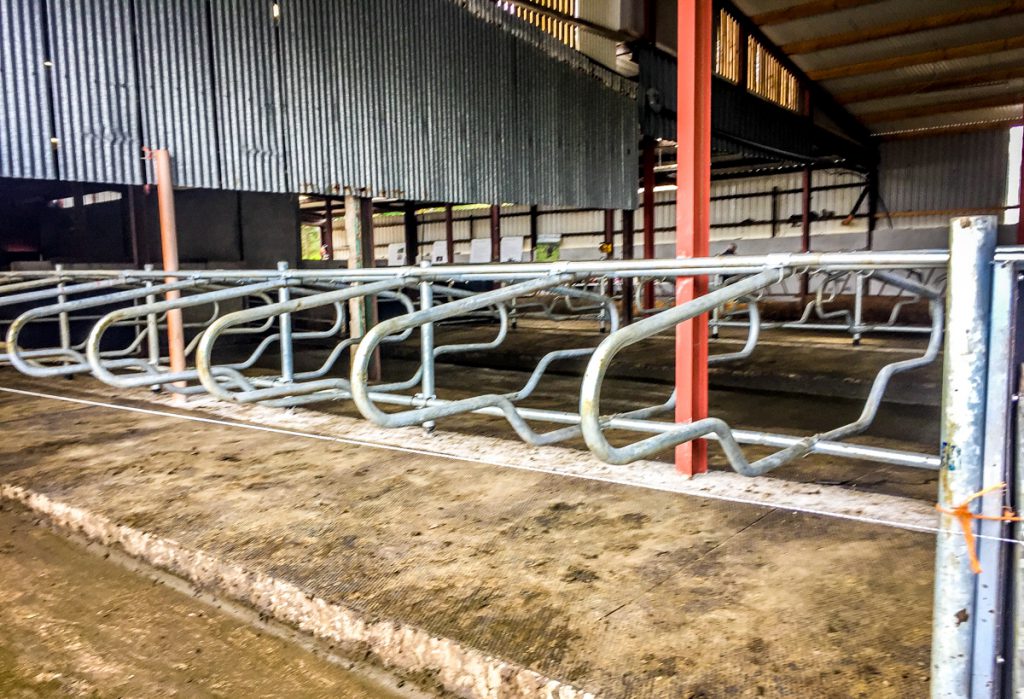 The new feed barrier is a great job, Conlon said; with the high rainfall in this area it can be called on anytime – both in spring and autumn. 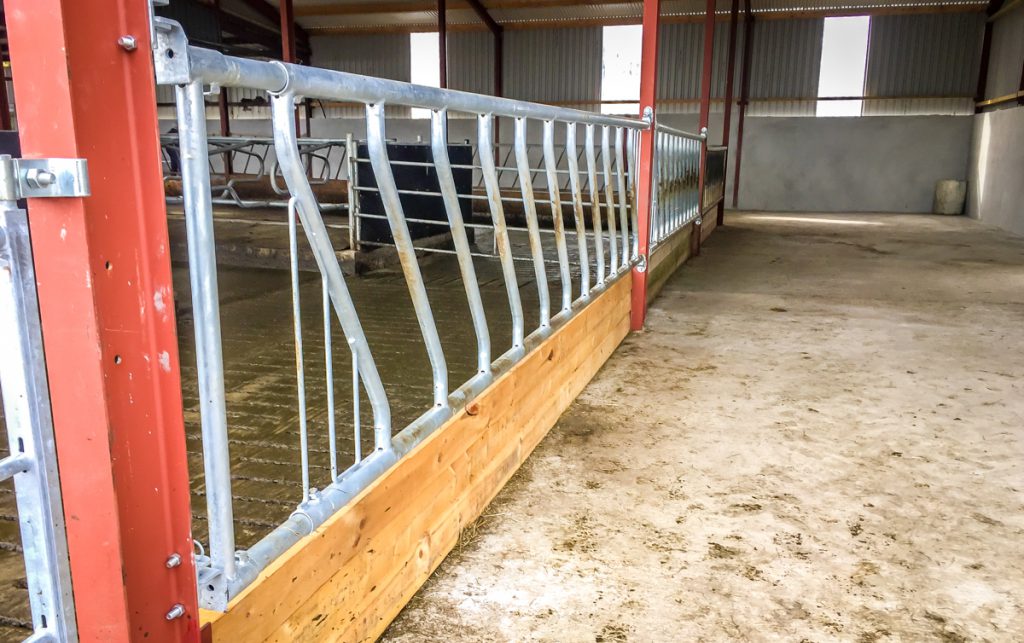 A new collecting yard was built with the capacity to hold 90 cows. The new slatted tank was added to ensure the farm is compliant with slurry storage regulations. Conlon has previsions for two additional calving pens, which will be in place for the next calving period. 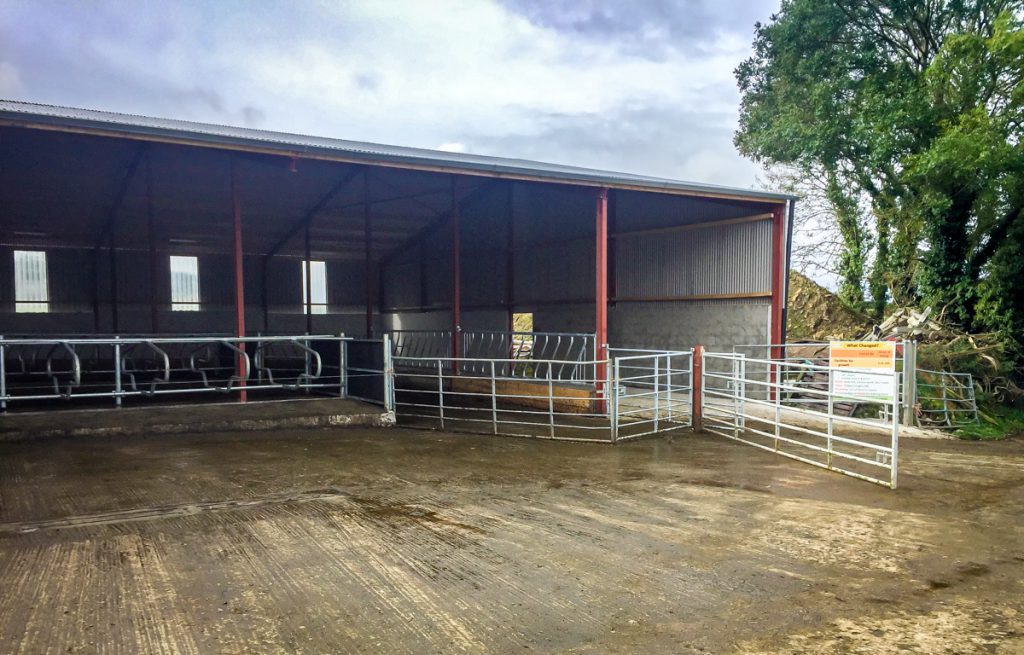 The Conlons’ cost of production currently lies at 21c/L before labour. Fixed costs are currently running at 7c/L. This has increased by approximately 2c/L in recent times due to the development of the facilities within the yard.

“It’s a lot of money. Capital investment has to be very well planned. When you think back over the last three years in terms of milk price volatility, too much investment will catch you out,” he said. 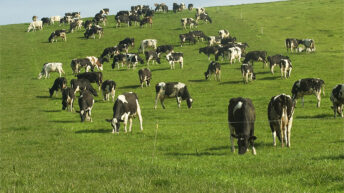 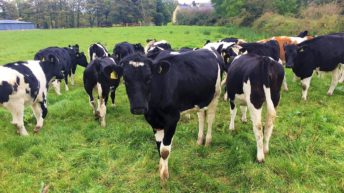