Figures for the emissions of five “key air pollutants” have been released today, Tuesday, May 7, by the Environmental Protection Agency (EPA).

A statement from the EPA said: “These pollutants impact both environment and health, contributing to respiratory problems and pollution of soil, surface water and vegetation.”

This latest information from the EPA shows that ammonia emissions increased by 2% in 2017, which followed a 5% increase in 2016.

According to the EPA, agriculture dominates emissions of ammonia, which arise from the decomposition of animal manures and the application of fertiliser.

This trend in increasing emissions is projected to continue out to 2030. In addition, emissions of non-methane volatile organic compounds showed an increase in 2017.

These pollutants arise from the food and beverage industry and the storage and handling of animal manures and synthetic fertilisers, according to the statement.

Commenting on the figures, Dr. Eimear Cotter, director of the office of environmental sustainability, said: “Our figures show that ammonia levels are on an upward trend, in tandem with increased agricultural production, and that they breached national limits in 2016 and 2017.

“This has implications for air and water quality.

“The National Air Pollution and Control Programme, currently out for public consultation, will need to address these emissions, particularly as they are projected to increase further to 2030.

“Options to increase efficiencies and reduce fertiliser use will need to be implemented at farm level,” she recommended.

Continuing, the statement remarked: “This reflects a general downward trend in emissions since 1990, reflecting the impact of fuel switching – from coal and peat to natural gas – penetration of renewables and technology improvements.”

Looking to the future, the statement drew attention to projections that sulphur dioxide and particulate emissions will remain compliant with substantially lower national limits in 2030, provided planned measures are implemented.

This is not envisaged to be the case for nitrogen oxide emissions.

The statement warned that the transport sector is projected to continue to be a key source of emissions.

The EPA’s senior manager, Stephen Treacy, said: “We have seen the positive impact of a range of policy measures and regulatory interventions since 1990 which are particularly evident in declining sulphur dioxide and particulate emissions.

Fuel switching and the move to more renewables has brought dividends in terms of cleaner air, with effective regulatory intervention from the EPA also playing a role.

“It is important that this good work is not reversed in the context of a growing economy. Further measures are needed to meet national limits in the period from now to 2030, particularly for the pollutants ammonia, nitrogen oxides and non-methane volatile organic compounds,” Treacy concluded. 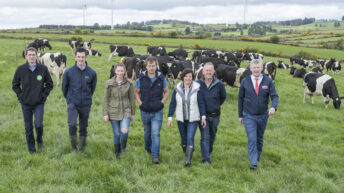 LESS is more: Secrets to success for ‘Green’ dairy farmers