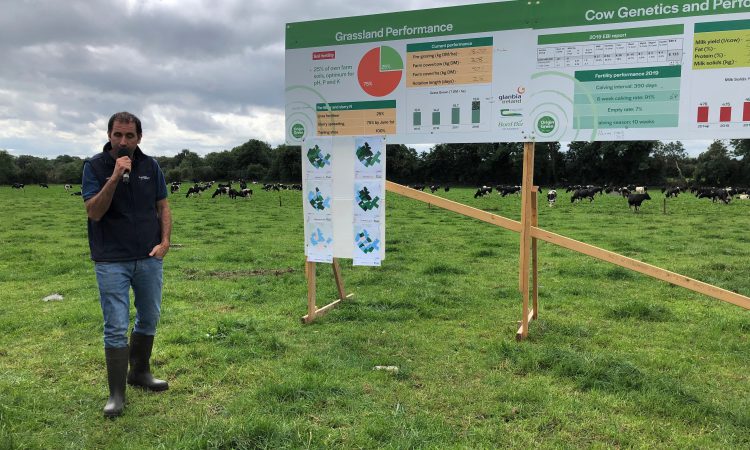 The O’Loughlin family farm is a prime example of a well-managed, family-run dairy farm; who have done their best to adopt the most efficient and sustainable farming practices, while still achieving a very high level of farm performance.

On Tuesday, August 27, Shane and the rest of the O’Loughlin family welcomed crowds of people to their farm to show that a large dairy farm, such as theirs, can still be sustainable and to demonstrate some of the farming practices they have implemented to do so.

Shane, who is a monitor farmer for Glanbia, is currently milking 200 cows – with 150 calving in the spring and 50 calving in the autumn. However, the farm is now moving over to 100% spring calving.

The reason for this, Shane said: “It wasn’t an easy decision to leave liquid milk, but it was more of a lifestyle thing than anything else.”

The farm has expanded a lot over the last number of years.

“Last year, we were milking 220 cows with plans to go up to 240; but after last year – due to the drought and snow – we have decided to scale it back.

We now feel that 200 cows here isn’t putting us under too much pressure and is sustainable.

The total area of the farm consists of 116ha, of which 68ha is the milking platform, with the rest being used to rear young stock and for silage. 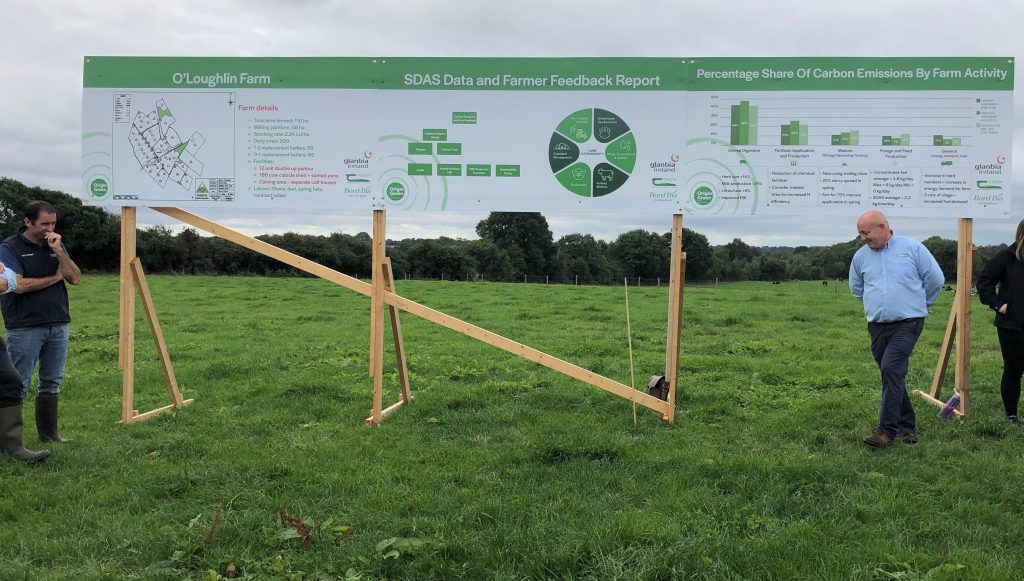 The farm facilities include: a 12-unit double up parlour; 180-cow cubicle shed and slatted pens; calving pens; and calf houses.

In terms of farm labour, Shane and his father do most of the work with a relief milker – who is a beef and sheep farmer – doing 12 milkings/week. They also employ extra help for the spring period.

Through his sustainable and efficient farming practices, Shane has reduced his farm emissions in three main areas – which Eleanor Murphy, Bord Bia’s data manager, discussed on the day. 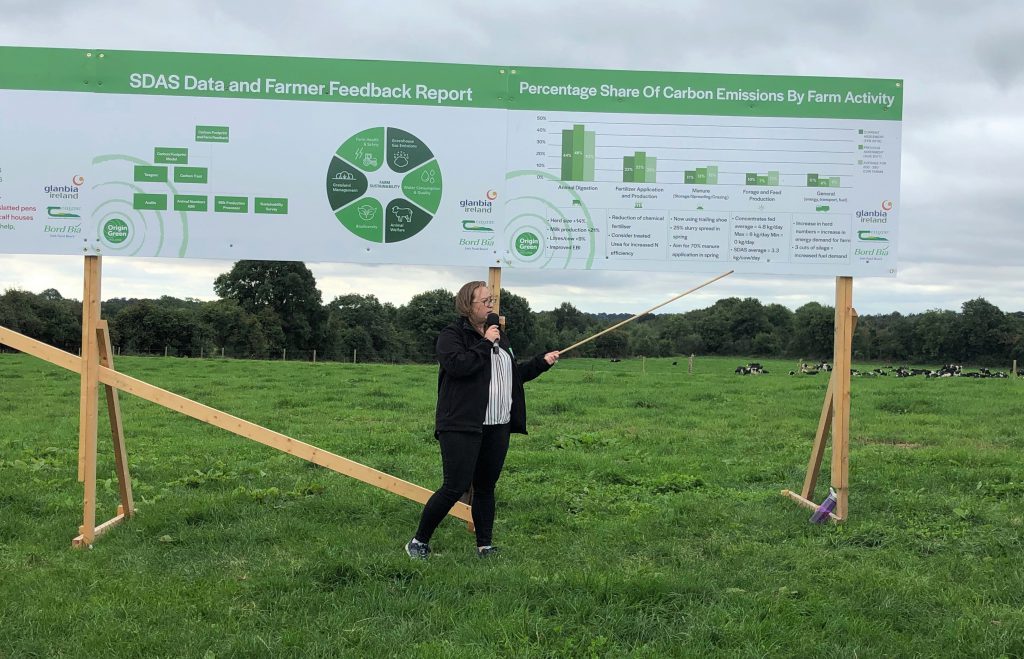 The main areas of emission reduction – when the 2019 Bord Bia report was compared to the previous report in 2017 – were in animal digestion, fertiliser and manure emissions.

Touching on this, Eleanor said: “While his herd size has increased, his animal digestion emissions have fallen by 4%. This is because the increase in milk production can outweigh the emission increase when focus is given to improved grass and quality and maintaining good herd fertility.

“Furthermore, through the use of a trailing shoe he has reduced his manure emissions by 2%.”

All these emission reductions were made through making some very simple and low-cost changes by Shane.

The herd is made up of high-EBI Holstein-Friesian genetics. Shane is continuously trying to improve his herd’s EBI, with the present EBI being €133.

The EBI for Shane is delivering in both milk and fertility, with fantastic results being achieved in each area. 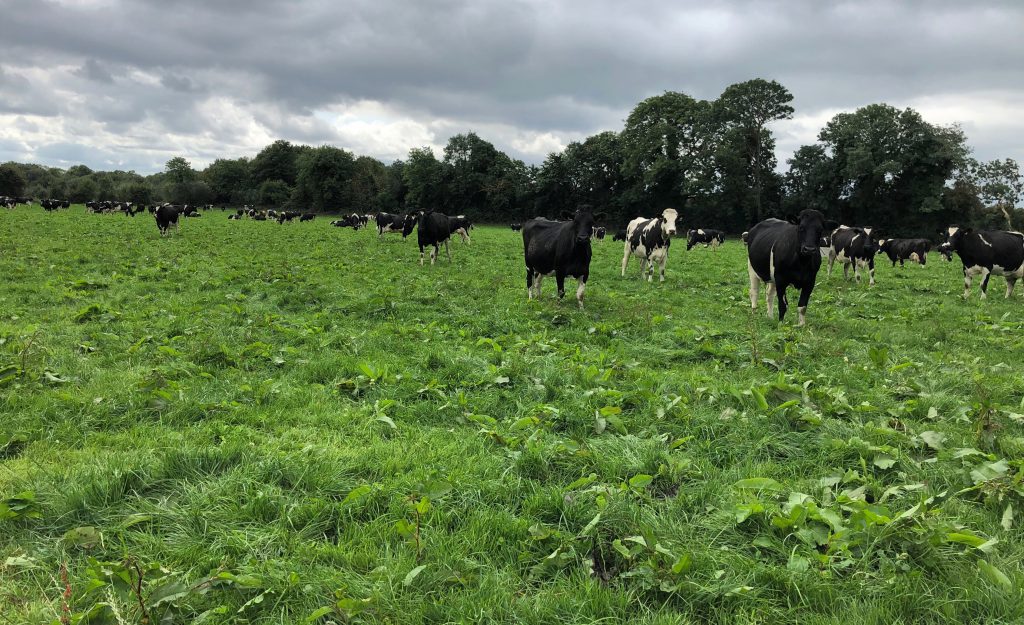 In addition, the farm is achieving a 91% six-week calving rate and he is calving 95% of his heifers between 22 to 26 months.

Shane had scanned the cows before the walk and had an empty rate of 5% in the cows and a 2% empty rate in the heifers.

During the visit, Emma O’Grady from Glanbia and Fiona Doolan from Teagasc both spoke on the topic of water quality.

Firstly, Emma touched on why there is such a need to protect water quality, by saying: “We really need to start thinking about water quality. 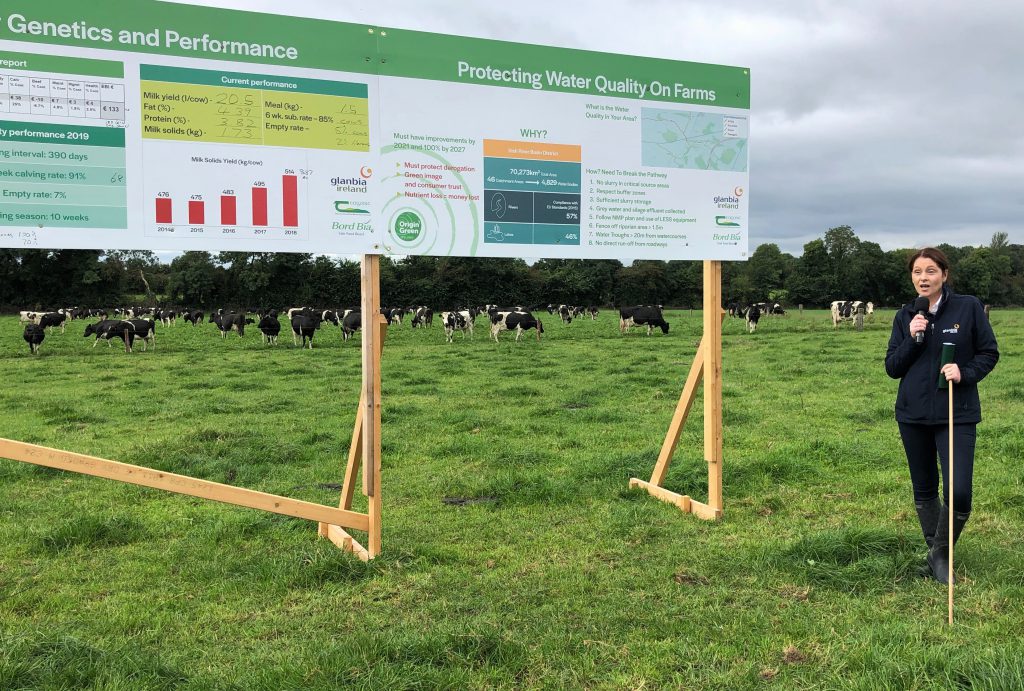 However, what is more worrying are the trends in water quality.

“Between 2015 and 2017, there was a net decline in water quality in 3% of our water bodies. It is these trends which are going to determine whether or not Ireland is granted a derogation in the future,” she added.

Teagasc’s Fiona Doolan continued by explaining what the O’Loughlins are doing to ensure that they don’t have a negative impact on water quality in the area. 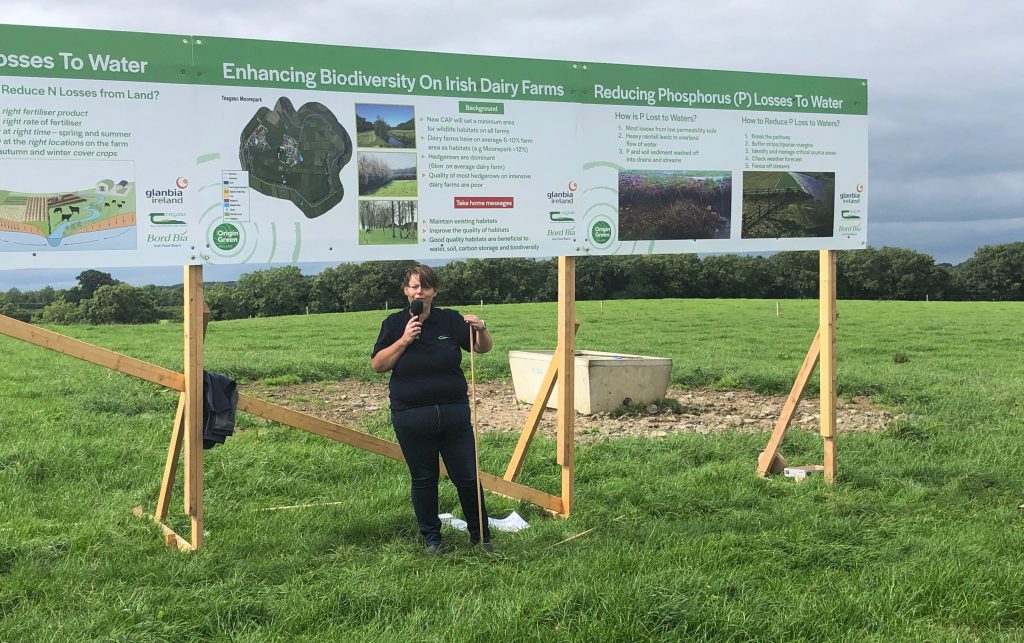 “Shane has extra slurry storage. This means he is not under pressure to get out in poor weather conditions because his tanks are full.

“Shane is also very conscious about buffer strips and keeps his contractors informed about where to go and where not to go with his slurry,” explained Fiona.

In some poor draining areas, Shane has planted shrubs and trees to create a physical barrier between the land and the water course in an effort to prevent any run-off making its way to the stream.

Part of being a sustainable system, for Shane, means being able to produce almost all the feed on the farm.

Reseeding and improvements in the farm’s soil fertility has had a huge part to play in achieving this high level of grass production. 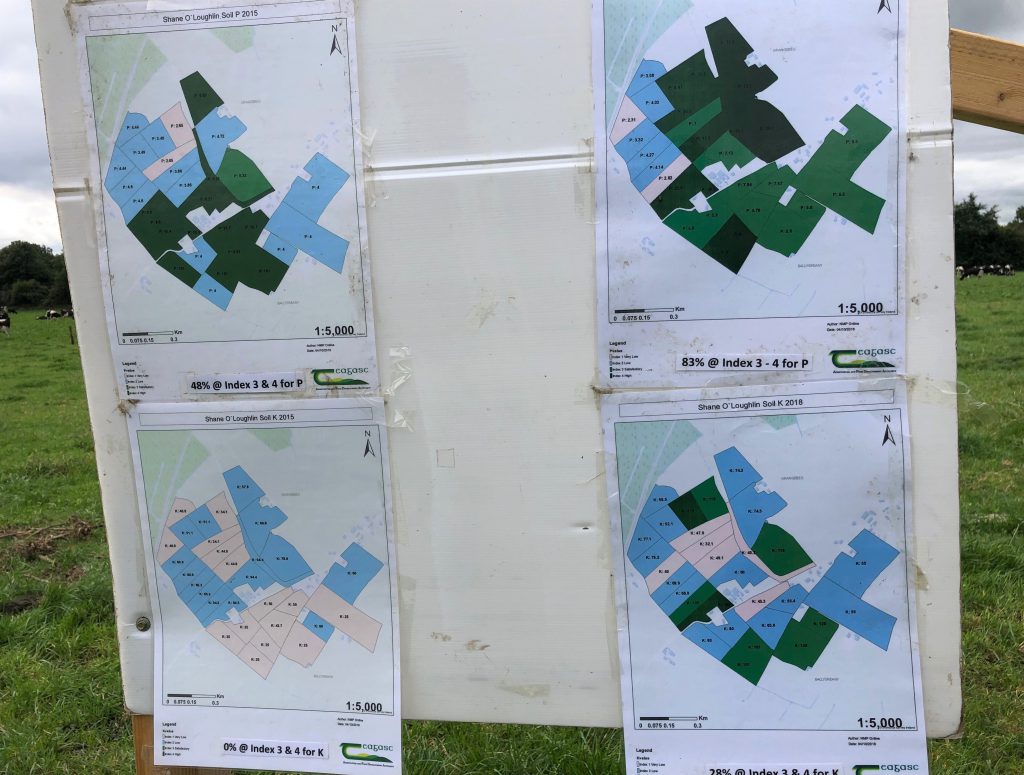 However, Shane intends to improve the K status of his soils through targeting them with slurry – using a dribble bar or trailing shoe – and spreading potash in the back end of the year.

Currently, Shane does not use protected urea but he plans to introduce it in the future. From an emissions point of view this would make a huge difference to his contribution.

Finally, Teagasc’s Catherine Keanan, who covered the topic of biodiversity, said: “There is a biodiversity emergency worldwide. Of the 100 bee species in Ireland, 30 are in danger of extinction. This is due to the disappearance of certain plants.

On farms, we have a lot of habitats and it is up to farmers to do what they can to protect these habitats.

“On Shane’s farm in particular we have lovely tall hedgerows, some native woodland and also some unfertilised grazing areas.”

Catherine, advising farmers on hedgerows, said: “Birds will only nest in hedgerows that have a dense base and are over 1.5m in height. Anything less and they will not be suitable for birds to nest in. 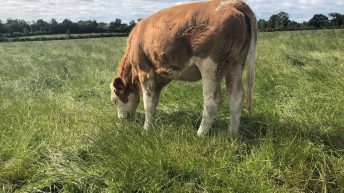