The Covid-19 pandemic can’t be used as an excuse to delay addressing the challenges of climate change, environmental degradation and biodiversity loss, according to Ireland’s European commissioner-designate Mairead McGuinness.

The Fine Gael MEP was speaking at a hearing before a European Parliament Committee in Brussels this morning (Friday, October 2).

Mairead McGuinness had to demonstrate her general competences and expertise in her designated portfolio of Financial Services, Financial Stability and Capital Markets Union.

She cited the EU’s Green Deal and sustainable finance as key priorities should she win approval for the EU job.

McGuinness was nominated for the role of Ireland’s commissioner after the resignation of Phil Hogan following controversy over his attendance at a golfing event in Co. Galway in August.

McGuinness said: “With the support of this committee [Economic and Monetary Affairs Committee], I will prioritise a new action plan in sustainable finance, accelerate work on an EU Green Bond Standard, eco-labels, green sustainable investments and improve disclosure of climate and environmental data by companies.”

McGuinness added: “Under all circumstances – deal or no deal – the trade and financial services between the UK and the EU will be different and less fluid as of the first of January next year.

All EU financial firms and stakeholders need to prepare for this; many already have and others need to do so urgently.

McGuinness said that a financial system which serves society ‘holistically’ is also a major priority should be formally appointed a commissioner.

She said: “[A system] that takes seriously its responsibility to address climate and environmental challenges.”

Today’s hearing will be followed by meetings in which the chairs and group representatives (coordinators) of the committees will evaluate the candidates’ suitability, according to the European Parliament.

She has served as First Vice-President of the European Parliament since 2017. 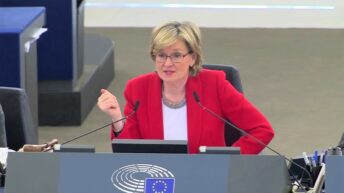