Dairy farmers need to keep a number of factors in mind when selecting a beef bull for their dairy herd, according to the ABP Group’s Stephen Connolly.

Connolly discussed why choosing a beef bull on its terminal traits is important at last week’s Moorepark ’17 open day.

“The national dairy herd is expanding and there’s going to be more and more dairy calves available for beef production,” Connolly began.

According to a recent survey, dairy farmers identify two priority traits when choosing a beef bull for crossing with their dairy herd; these are easy calving and short gestation.

“Dairy farmers are selecting for easy calving and short gestation and, after that, nothing else.

While the contribution of calf sales to overall profit is generally considered small; Teagasc is encouraging dairy farmers to optimise the value of calves produced.

Both bulls were easy calving and short gestation, which dairy farmers want. However, one bull was higher for carcass traits than the other.

“That’s a huge saving for a beef farmer.

“More of the animals from the high terminal index bull received their Quality Assurance bonus (12c/kg) and more of them received their breed bonus (Angus and Hereford bonuses) at peak times that was worth 30c/kg,” Connolly said.

This trial has led on to the Teagasc/ICBF/ABP dairy beef programme – a breeding programme hoped to develop an index of the best beef sires for dairy farmers to use on their dairy herds.

It is also hoped that the economically important traits for dairy farmers – easy calving and short gestation – will be maintained. 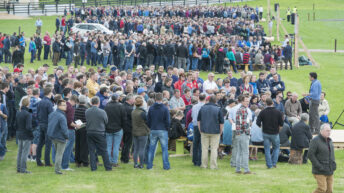