This weekend is set to be changeable, with some rain likely. Milder and drier conditions are likely next week, according to Met Eireann.

Today, Friday, is expected to be a mainly dry day, with sunny spells in places; it is set to be rather cloudy in many areas.

A few light showers are forecast, but most places will be dry. Temperatures are expected to range from 10 to 13 degrees, with light variable breezes becoming moderate (southwesterly).

Tonight is set to be mainly dry with some clear spells. Cloud is likely to increase from the Atlantic later in the night, bringing drizzle to western and southern coasts by dawn.

Temperatures are expected to drop to between 4 and 7 degrees in a moderate southerly breeze, but there is very little danger of frost.

Drying conditions are forecast to deteriorate over the weekend and the early part part of next week, according to Met Eireann.

Similarly, spraying conditions are likely to turn poor on Saturday as winds strengthen. Meanwhile, field conditions are set to remain quite good, with little or no changes expected.

Tomorrow, Saturday, is forecast to be mainly dry to start, with the best of any hazy sunshine early on – especially in eastern and northern areas.

It is set to be cloudy and misty in most places; patches of drizzle, fog and light rain will affect southern and western areas at times, according to Met Eireann.

Temperatures are expected to reach between 11 and 13 degrees, in fresh and gusty south to southeasterly winds.

It is likely to be breezy, misty and mostly cloudy on Saturday night. Some heavy rain is expected in parts of Munster.

Meanwhile, Sunday is forecast to be cloudy, misty and breezy, with fresh easterly winds to start the day.

Rain looks set to become widespread as the day progresses and will be heavy in many places, but the winds will become moderate later and variable in direction.

Top temperatures of 10 to 13 degrees are likely, while further rain is expected at times overnight.

Early indications for Monday suggest that there will be a mixture of some scattered showers and dry intervals, as temperatures range from the low to mid-teens.

There are also signs that the weather will turn dry and mild mid-week, with some decent sunshine at times, according to Met Eireann. 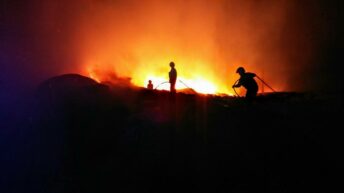