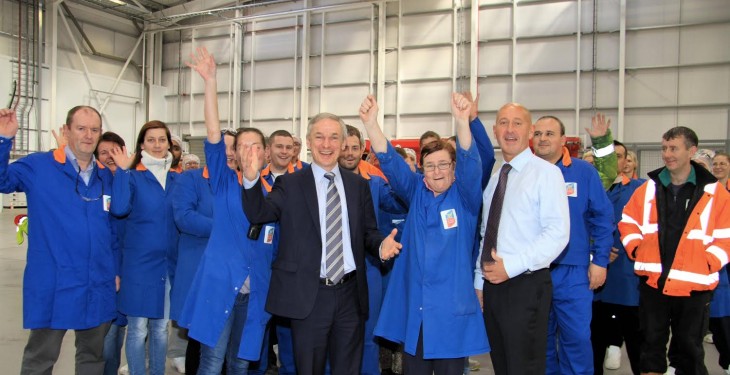 C&D Foods has announced that it is opening a new state-of-the-art pet food pouch manufacturing facility in Edgeworthstown.

The new facility, an extension to the plant that was built in 2007 following a major fire, will produce pet food pouches for many of Europe’s leading own label brands. It will be the biggest of its kind in Europe and represents an investment in excess of €15 million.

C&D has invested over €55 million in Edgeworthstown since 2007. The opening will result in 70 new jobs over the next three years, for which hiring has commenced. The project has been supported financially by the Department of Jobs through Enterprise Ireland.

Commenting on the new facility, Phillip Reynolds, CEO of C&D Foods, said the announcement, following on the back of the company’s €40 million investment in 2007, increases our capacity to supply our wider European customer base following our acquisition of Arovit A/S in 2012.

“It is further evidence of the success and strength of our Edgeworthstown facility and its significance as part of our European manufacturing footprint,” he added.

C&D Foods is the second largest private label pet-food company in Europe with sales in excess of €300m pa and is owned by Larry Goodman’s ABP Group.

C&D Foods employs over 1,000 people across its manufacturing sites in six countries including Ireland, UK, The Netherlands, Spain, Austria and Denmark. The company also has sales offices in Germany and Italy. In Ireland, C&D Foods has a manufacturing site in Edgeworthstown with an administrative head office located in Mullingar.