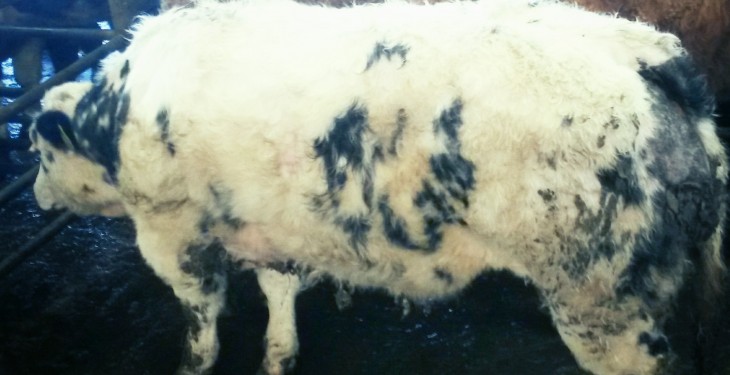 There is strong farmer demand for weanlings with the top lots selling to €3.14/kg, according to the country’s mart managers.

The trade for weanlings remains strong with the plainer of these lots selling from €1.70-2.00/kg while the better quality lots generally sold from €2.60-3.14/kg.

Cattle are still a very good trade in Mohill Mart with no slippage in prices, according to the Mart Manager Steven Hannon.

According to Hannon, there was a full clearance of cattle in its weanling sale on Wednesday with 300 finding new homes, with strong farmer activity still present around the ring. 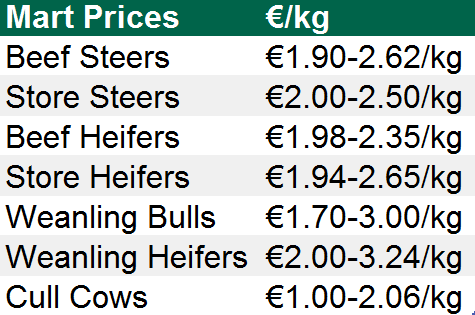 Hannon is also the Mart Manager in Ballymote Mart, where there was a fine trade for steers, heifers and cull cows on Thursday last.

We are not seeing any difference in the trade from last week, there has been slippage in price, said Hannon.

Hannon added that there was an entry of 50 dry cows with the hammer falling on the top priced cow at €2/kg.

Kilkenny Mart had a similar size sale to last week with 1,050 cattle passing through the ring with a steady trade for quality lots, according to the Mart Manager Michael Lynch.

However, Lynch added that plainer lots were more difficult to sell, but all of the heifers on offer met with a very fast selling trade.

The trade for the 500 cattle on offer in Kenmare Mart on Thursday was a little easier than previous weeks, according to the Mart Manager Dan McCarthy.

But despite this tougher trade, he added, that prices achieved for weanlings were good. Weanling bulls sold from €2.25-3.00/kg.

However, he added that weanling heifers were a little easier than previous weeks with these lots trading from €2.27-2.71/kg.

The Mart Manager added that some farmers are now selling autumn born calves at two-three months of age, these runner types are trading from €450-600 each.

The was a good sale of cattle in Dungarvan Mart on Monday last according to the Mart Manager Ger Flynn.

Heifers in the Co. Waterford venue achieved quite similar prices to their counterpart steers, forward heifers traded from €1.98-2.01/kg while the lighter store lots weighing from 400-500kg made €1.94-2.17/kg.