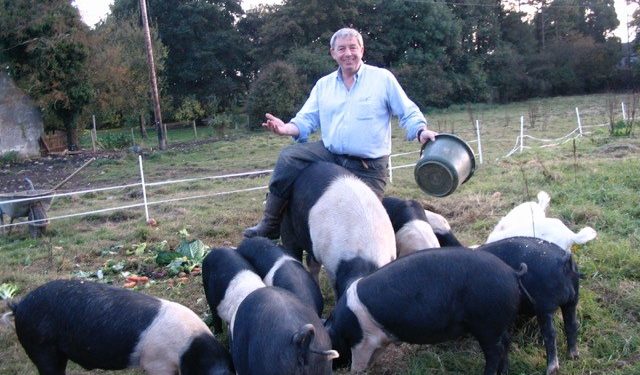 When it comes to buying a farm, starting out with a piece of string and a pencil – and drawing a two-hour circle from Dublin for potential locations – is a novel approach.

But for Margaret O’Farrell and Alfie McCaffrey, who waved goodbye to city life and went on to set up a free-range pork business in North Tipperary, life is all about new experiences.

The couple moved to Lorrha in October 2003. They had been running a scuba diving business in the capital. “We ran into difficulties with NAMA landlords which forced us to close the business,” O’Farrell said. “We tried to find a new premises but the cost of ‘key’ money was astronomical.”

Selling up in Dublin

They decided to sell their Dublin ‘semi-d’ and move to a rural area. “There was no major plan; in retrospect it probably was a bit reckless,” O’Farrell said. “We had no jobs to move to, but we both felt that we were adaptive and willing to work at anything.”

For weeks, they drove to various parts of the country, until they found their new abode in Redwood, near Nenagh – a detached house on 2.5ha. Within two months, they had both found work locally and worked at various jobs until the end of 2009.

For the first couple of years, we concentrated on renovating the house as we were both working full-time. We had no idea what to do with the land around it.

Neighbouring farmers, during the early years, kept sheep and horses on the farm.

“In 2006, we bought our first pigs, having attended a one-day pig-rearing course in Leitrim. Alfie fell in love with the pigs, and immediately committed to taking two. We were going to grow those two for meat for ourselves and family. However, when Alfie drove back to Leitrim to collect the pair, he couldn’t resist taking a third home.”

All went well until McCaffrey decided they needed company and four females joined the fold.

“About five months later, we had 42 piglets. We were suddenly in the pig business. This was not part of any great plan,” O’Farrell said. “We opted for rare breeds such as Saddleback, Hampshire and Large White at that time. We later introduced Gloucester Oldspot to the mix.”

All are allowed to roam free-range, fed on locally-grown barley, whey and vegetables.

“We are very strict on feeding a non-GMO diet to all our animals,” O’Farrell said.

We managed to sell the majority of the bonhams and, while the remainder grew, we developed a business model based on selling meat directly to the customer.

“This was to achieve a better return-on-investment. Factories were not interested in paying a premium price for free-range. They were offering the same price per kilo as for factory-farmed animals.”

The couple used every means possible to develop the customer base. “We started with friends and family, asking them to buy, share and spread the word. We developed a mailing and text messaging list,” O’Farrell explained. “At that time we sold the pork in 4kg-lots, delivering via courier directly to the customer.

“Following Alfie’s heart attack last year, we are reassessing how we sell, considering the model of ‘growing to order’ – whereby customers will pre-commit to taking a half or full pig and we will ‘grow’ it on their behalf.”

One of their greatest challenges was finding a small abattoir licensed to kill pigs.

“There are very few in Ireland; this is also true of finding somewhere to handle hens and ducks.”

Social media has been a great boost. “We set up a Facebook page – OldfarmPork – and developed our website – www.oldfarm.ie. We also use Twitter and, more recently, Instagram and Pinterest. We have customers who contact us across all these platforms. We have also found that curating on some of the larger accounts helps promote the business,” said O’Farrell.

Like any farm business, you need to keep your options open and look at side enterprises that can be run. From our previous lives, both Alfie and I are qualified trainers.

“In the initial stages of the pig/pork business, we were constantly having people ‘drop by’ to see how free-ranging worked – wondering if they could do the same thing. It was after a very frustrating brain-picking visit from one group that we thought: Let’s offer a pig-rearing course, where we share our knowledge but are paid for it,” O’Farrell said.

Participants now range from families who want to rear meat properly for their own consumption to farmers – who want to go into the business of free-range pork and bacon.

“We have even had a group from a Dublin allotment come on a course. A lady also travelled from Portugal and is now running a successful free-range organic pig farm. We’ve even had people from Nigeria,” said O’Farrell.

Social media courses were added, as people attending the existing courses wanted to know how to promote their new ventures. In 2013, another sideline was added – as a result of visitors who ‘gushed’ about the views and peace and quiet of the setting.

“We signed up for Airbnb. It is certainly different. You are entertaining complete strangers in your home, but we have met some lovely people along the way – many of whom have become friends.” 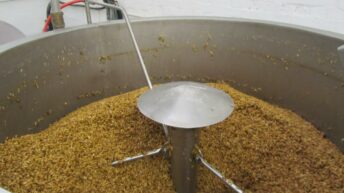