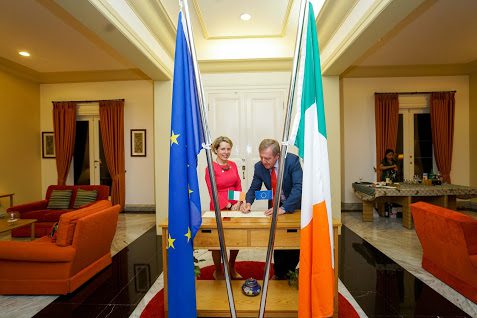 Minister for Agriculture, Food and the Marine, Michael Creed, today (Friday, November 2) welcomed the awarding by the EU Commission of co-funding of €3.16 million towards a €3.9 million Bord Bia information and promotional campaign promoting European pork and beef over three years in the Philippines, South Korea and Vietnam.

The campaign, which is entitled European pork and beef – excellence in quality and production standards, will commence in early 2019 and will target a population of 250 million people across three countries – South Korea, Vietnam and the Philippines.

The project aims to build and strengthen awareness of Europe’s high standards in the production of quality pork and beef – particularly those from Ireland. It will also aim to build the positive image in those markets as a trusted partner.

The campaign will aim to hit target audiences, such as trade, market influencers, key decision makers, bloggers and foodies.

The announcement comes as Minister Creed finished a week-long Trade Mission to Indonesia and Malaysia, where he worked on opening up opportunities for Irish meat and dairy in South and East Asia – which is home to over 650 million people, or 9% of the global population.

The Minister stated: “I am delighted to see the EU recognition and financial support for an attractive industry programme to raise awareness of European pork and beef as a high quality product.

“Food Wise 2025 – our industry led plan for the agri-food sector foresees a sector that acts more strategically and achieves a competitive critical mass in the international marketplace.

“I commend the Irish meat industry for their positive input and for their collaboration in the co-funding of the national element of this programme”.

The Philippines has been a significant market for Ireland’s beef and pigmeat industries since market access opened in 2014.

“Vietnam and South Korea are two countries considered as high priority by my department and industry, both with prospects that have been identified within the top five potential meat markets by Bord Bia as part of its market prioritisation exercise,” the Minister added.

Ireland has existing pigmeat access for both South Korea and Vietnam.

This programme will build on the access achieved and highlight the attractive qualities of European and Irish pork in these markets.

“With regard to beef in South Korea and Vietnam, significant development work has already been carried out by my department with the ongoing assistance of the Irish Embassies there and in conjunction with the industry and Bord Bia as part of a process to achieve beef market access in these countries. This work is ongoing,” the Minister concluded.

Through its prioritising markets study Bord Bia has identified the growth potential of south and east Asia for Irish food and drinks exports.

The expanding middle class in these countries and growing demand for consumer food made from quality ingredients.

“This campaign gives us the opportunity to broaden our promotional efforts at a time when expansion into international markets is becoming increasingly important.

“Over the course of the three year campaign, Bord Bia will target more than 500 key trade and decision makers to attend technical seminars and over 300,000 buyers will be accessible to our meat exporters at international trade shows.

Minister Creed highlighted that: “The 2019 call for proposals will open in February 2019 and I look forward to more Irish applications being submitted to the European Commission“.