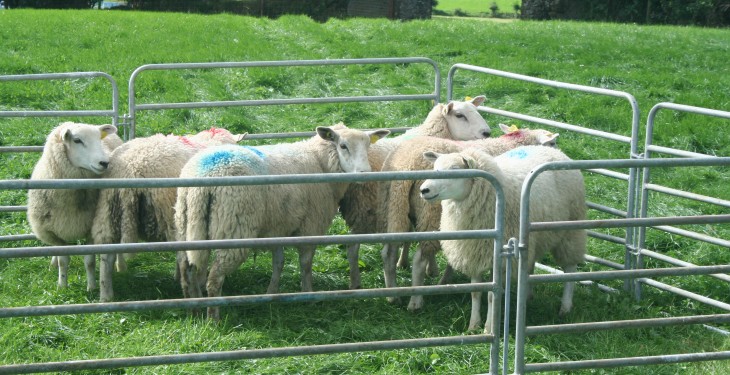 In Focus: Situated in the idyllic setting of Johnstown Kilkenny, the farm of Brian Nicholson was the setting for this week’s Teagasc Better Farm Sheep Programme on Thursday. With 108 hectares of grassland and 550 ewes the setting was ideal, with warm sunshine greeting visitors.

Farmer Nicholson joined the Teagasc Better Farm Sheep Programme in 2012 and has undertaken a number of changes, including expanding his flock, delaying lambing dates, adopting new technologies in the management of his grassland and parasite control among other changes to his farm. The plan’s overall aim is to increase the productivity and profitability of the sheep enterprise in Ireland.

As well as farming sheep Nicholson produces round bay silage which he both uses himself and sells. Under the Teagasc scheme Nicholson has expanded his flock from 474 in 2012 to 551 in 2013, with a further expansion to 1050 ewes planned, with 275 lambs.

Nicholson traditionally lambed outdoors and noted, “Last year I lambed indoors, as the previous winters had been harsh, with a high lamb mortality rate”. Last year the lamb mortality rate was 7.8 per cent, a huge reduction on 2012’s 20.8 per cent. Asked whether he would lamb indoors or outdoors next year Nicholson said “We’re not sure yet. We’ll have to wait to decide.”

Speaking at the event Terry Carroll from Business and Technology in Teagasc said: “We’re not reinventing the wheel with this programme. We’re just doing basics on a high level.”

The event was divided into five stands, with speakers on lamb performance, grassland, the sheep value index, yearling flock productivity and diseases in sheep.

Frank Hynes from Teagasc spoke of the lamb performance on Nicholson’s farm, showing an increase in lamb weight on the farm using the programme. Hugh Mahon  of Teagasc then spoke on the positive results on the farm under the rotational grass procedure.

“If farmers have a high concentrate level in their feed its hiding an issue with their grass. Farmers need to be closing paddocks mid-October to get the best out of their grass” he said.

Joe Hand from Teagasc spoke about the importance of the Sheep Value Index which has led to a greater yield and weight in lambs on the farm. Results have shown up to a 3kg increase in weight in lambs. Hand also demonstrated what farmers need to look for in a ram, speaking of the visual clues that indicate a good ram. He suggested farmers use a minimum of three rams.

“There’s such a thing as a blocker ram. If you have two ram’s the blocker ram basically bullies the other ram away from the ewes. If the blocker is firing blanks or diseased they’re both useless. Having more than two prevents this,” he said. At the same stand Michael Gottstein of Teagasc spoke of the importance of genetics in sheep, with a breeding index leading to improved results on the farm.

Michael Diskin from Teagasc also spoke on the positive results that the programme has had on the farm, with 210 lambs put to ram yielding 100 lambs. He highlighted knowing which lambs belong to which ram and that farmers should keep track of their stock to keep the genetics strong and avoid inbreeding.

Finally William Fitzgerald from Kilkenny Regional Veterinary Laboratory of the Department of Agriculture, spoke about parasites and viruses affecting sheep in Ireland, including Toxoplasmosis, Enzootic Abortion and the Schmallenberg virus.

Earlier  Nicholson admitted that “If you have sheep on a farm it will never be entirely parasite free”. Fitzgerald answered question from concerned farmers about how to deal with the Schmallenberg virus which affected the South and East coasts of Ireland this year but is expected to reach the entire country in the coming months. Fitzgerald warned that dipping will not prevent the virus and that farmers can avail of a vaccine.

The day was a success with each speaker informed and welcoming of questions. Farmer  Nicholson was also available at several stands to answer questions on the results he has seen. The programme is still in its early days with only one year’s results but he has so far been happy with it.

The event was well attended with farmers travelling from the surrounding counties eager to see the results on Nicholson’s farm.

Below is a slide show of the event: