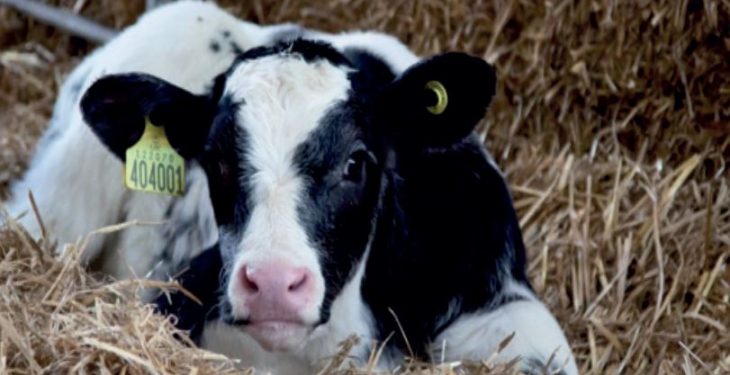 One group was fed Shine Once-a-day and the other Shine Twice-a-day.

The calves had ad-lib access to dry feed, straw and water at all times and were offered 600g of a skim milk, buttermilk-based milk replacer each day. 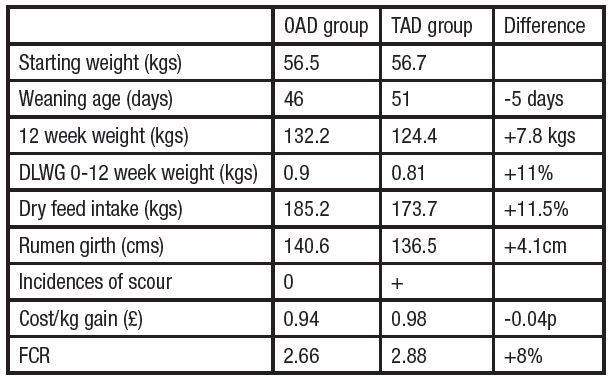 There was also a saving of one hour’s labour per calf reared on the OAD system.

This means farmers have more time to inspect their calves and treat illness quickly so the welfare of the calves is improved.

Thereafter the calves were treated similarly and reared as bulls finished at 13-14 months of age on an intensive cereal beef system (see tables 2-4).

The performance of both the Holstein and Continental x bulls on trial exceeded the UK’s EBLEX targets for intensive cereal beef production.

Numerically the calves reared on the OAD system had higher slaughter weights, daily liveweight gains, carcass weights and carcass values, but the difference was not statistically significant (P=<0.05).

There was no difference in carcass gain as the TAD calves had a higher killing out percentage.

It is important to use a high quality skim-based milk replacer, as using cow’s milk on its own or standard calf milk reduces performance in the first five-to-six weeks.

The trials main conclusion is that calves do not compensate later on for poorer performance in the first eight-to-12 weeks of life.

Getting calves to eat dry feed early is vital as this is the engine for intakes and growth later in life.

As calves will convert 3kg of meal into 1kg of growth compared to 250-300g for an older animal it also makes economic sense as well.

It is worth noting that for calves to eat meal they need water regardless of how much milk they are fed.

A calf eating 1kg of meal will require 4L of fresh clean water.

According to Tom Warren of Bonanza Calf Nutrition, feeding calves milk once a day saves on water, electricity, and milk powder and allows more time for calf husbandry, while at the same time it improves calf performance.

So it is a true win, win, win situation for calf welfare, the environment and the farmers pocket, he added.