Aurivo has increased its December milk price by 1c/L, a spokesperson for the co-op has confirmed.

This will bring Aurivo’s December milk price to 30c/L including VAT.

This latest price increase from Aurivo represents the sixth monthly milk price increase in a row and reflects the improving markets for the co-op’s products.

Yesterday Kerry announced that it was holding its price for December milk supplies at 29c/L including VAT.

Supply volumes for December were low and Kerry has decided to hold the price at 29c/L after several months of increases, a spokesperson said.

Meanwhile, Dairygold also revealed their December milk price yesterday, deciding to increase their base price by 1.5c/L, meaning farmers supplying the co-op will receive a base milk price of 30.5c/L.

This meant that Arrabawn was the third co-op to set a milk price increase for December milk supplies, with Glanbia and Lakeland Dairies announcing prices last week.

Glanbia announced last week that it will pay its suppliers 30c/L including VAT for December manufacturing milk supplies.

Glanbia Ingredients Ireland (GII) has increased its base price for December by 1c/L to 30c/L including VAT for manufacturing milk at 3.6% fat and 3.3% protein.

Following this this decision, there will be no Glanbia Co-operative Society support payment to members this month.

The strong recovery in Glanbia’s milk price in the past six months has resulted in a positive conclusion to a very challenging year for the dairy sector, according to Glanbia Chairman Henry Corbally.

At the latest Global Dairy Trade Auction held in New Zealand product prices were mixed, but the overall price of the dairy products on offer improved by 0.6%.

This follows on from the first auction of the year, which was held two weeks ago, where prices declined by 3.9%.

Whole milk powder (WMP) prices were down by 0.1% at today’s auction, with lactose and rennet casein prices posted a mixed performance.

Skimmed Milk Powder (SMP) prices were also down by 1.6%, but butter prices actually improved by 1.6% on the previous auction results. 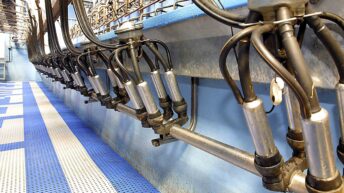