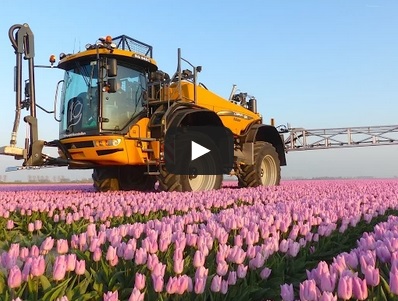 A farmer spraying a field of pink tulips in the Netherlands has been filmed by a drone and the contrast of colour is something that has to be seen.

The machinery in the video is a Challenger Rogator RG 645C that has 36m wide booms for spraying crops and has a 5200L tank.

Driving on 650/75R42 Continental tyres, the farmer is shown going from the yard to the tulip field, stopping to fill the sprayers tank on the way.

Tulip growing company Maliepaard Bloembollen has been cultivating tulips for the past 10 years, before that they were also involved in arable crops.

Now the company says it has year-round work with the tulips and harvests the flowers from over 100ha.

The company produces several varieties of tulips in a range of colours from red to yellow to white.

The video also gives a demonstration of the hydraulic working height from within the cab, for variable crop clearance.

The Challenger also has no problem going over speed bumps at 45km/h.

The Rogator model has many features including large spray lines with boom feeding on eight points, recirculation functionality and cab-controlled pneumatic nozzle bodies.

Take a look at the Challenger Rogator RG 645C in action: 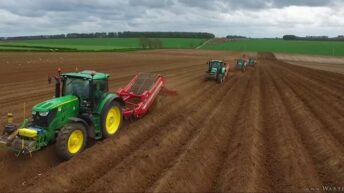