Glanbia’s recent launch of its Truly Grass Fed (TGF) brand in the US has led to disagreement between the Irish company and some industry stakeholder groups relating to whether the launch would disrupt Kerrygold sales in the region.

The Irish Farmers’ Association (IFA) raised concerns relating to the venture, noting that, based on previous experience, farmers are the ones that end up paying if there is price undercutting in the retail market.

The IFA said it strongly supports the Kerrygold brand, owned by Ornua, which farmers and their co-ops have invested heavily in over the last six decades.

The concept of marketing and selling Irish dairy products under a common brand, through Ornua, has proven to be a successful model which is envied by many other countries, the IFA said in a statement.

The farmers’ organisation stressed that mistakes made by co-ops in the liquid milk market at home have to be learned from.

It must be ensured that exporters don’t undercut each other and undermine the value of the global markets for Irish quality dairy commodities at the ultimate cost of the farmer, the IFA contended.

This issue must be thrashed out between Ornua, Glanbia and other Ornua member co-operatives as relevant, the association said.

“While continuous innovation and product diversification are an essential part of the future growth and development of the Irish dairy co-operative industry, it is also essential that such important processes should avoid duplication of resources, investment or any dilution of existing competitiveness by the industry in its approach to key markets,” the statement said.

In response, a Glanbia Ireland spokesman stated categorically that Truly Grass Fed (TGF) will not be under-cutting Kerrygold on price in the US cheese market.

“The Truly Grass Fed brand is not a direct competitor of Kerrygold – it’s targeted at a growing niche of informed consumers seeking verifiable claims on their food labels.”

“This will require targeting multiple market niches, of which the natural category in the US is just one.

“As an exporting organisation we have been investing for years in significant marketing and commercial resources to bring value to our manufacturing pool, for example in the case of Enriched Milk Powder (EMP). We have also invested heavily in physical assets to support our members’ growth ambitions and will continue to seek value adding opportunities in a global marketplace.”

He highlighted how additional brands can grow the total market, citing the example of Irish whiskey’s success.

Sales of Irish whiskey have grown very strongly in recent years as additional brands entered the market and grew the overall category, the representative noted. 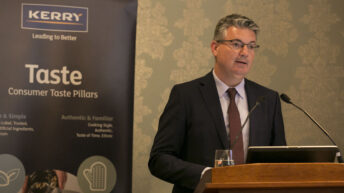