This week last year saw the first rumblings of discontent in the beef industry.

The first signs of what ended up as a beef protest can be traced by to a lively IFA meeting in Navan, where farmers first voiced their anger and frustration over several months of poor beef prices.

That meeting coincided with an IFA protest later in the same week in outside Tesco, in Naas Co. Kildare.

The farmer actions through the following autumn period last year was as a direct result of significant price falls starting in late 2013 and early 2014 when young bull producers margins took a serious hit as a result of strict specification changes by UK retailers in particular.

As the year progressed, margins in the rest of the beef market begin to suffer also with the UK/Irish beef price gap widening to as high as €1/kg, resulting in significant farmer anger.

In October, the situation came to a head when farmers held a three-day period protest beef factories.

The result was the formation of the Beef Roundtable by Minister Coveney where all stakeholders in the industry met to resolve some of the key issues.

Over the following winter, spring and early summer beef prices generally rose to the relief of most beef farmers particularly winter finishers many of whom faced going out of business.

Most commentators have said that the beef price rise could be attributed to a weakening of the euro and a general tightening in cattle suppliers since the beginning of 2015.

Where are we now?

However, the beef price rises seen over the last six months now appear to be slowing down. Indeed, quotes have fallen 10c/kg in the last three weeks in many plants throughout the country. 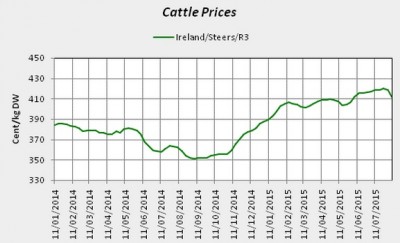 Cumulative supplies of cattle to Irish processors for the year to date are down 4% on supplies for the corresponding period last year standing at around 950,000 head.

Despite the euro currently trading near 70p the benefits of its continued weak value are now being tempered by problems for Irish beef in other markets with the Irish UK beef price gap remaining high at 93c/kg. 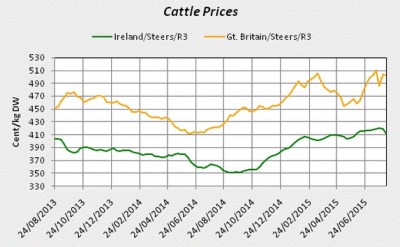 High-profile new market announcements have also been made since the Beef Crisis last year. The Irish industry now has access to two massive markets in the US and China. Despite this, shipments of significant product volumes to these markets have yet to take off.

Farmer organisations and indeed the meat industry have been frustrated with the slow progress in this area.

Where to now for beef?

According to Teagasc, higher market prices for young and finished cattle, combined with largely static input costs, should lead to improvements this year in the profitability of cattle production in Ireland over the poor outcomes that characterised 2014.

It says gross margins on cattle finishing look like being up to 20% higher than in 2014, while margins on single suckling farms could improve by up to 30%.

Despite this, there is no doubt that significant problems remain for the beef producers. Teagasc, in its outlook for 2015, said that despite net margins on average on cattle finishing farms forecast to improve farmers will still be making a loss this year.

Teagasc forecasts an average margin of -€136 for cattle finishing business, lower than the average negative net margin of -€166 per hectare estimated for 2014.

The Irish primary beef industry has been dogged by unprofitably for decades. Despite protests, Roundtable meetings, a weak euro and falling cattle numbers the very same problem looks set to dog the industry again this year.

Eventful as the last 12 months undoubtedly were, for most beef farmers, little has changed.