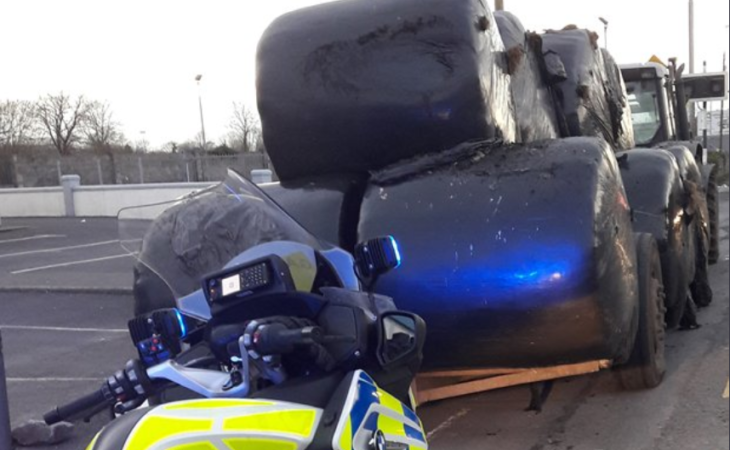 A tractor driver ran into a spot of bother with the law when the operator was pulled over by Gardai in Co. Galway for driving with 13 unsecured bales of silage. Upon closer inspection, a number of further safety issues were detected.

Posted on the An Garda Siochana Twitter page this morning – complete with a customary pun – it was revealed that, in addition to the unsecured bales, there was no breakaway chain attached to the tractor and no lights on the trailer.

‘Hay!!!…….that’s not secured!’ Gardaí in Galway stopped this tractor with 13 unsecured bales. No breakaway chain attached to tractor, no lights on trailer and wheel nuts missing. Driver to be prosecuted pic.twitter.com/OuQYXWenjL

It was also found that two nuts were missing from one of the wheels on the trailer. The driver is to be prosecuted, according to the Gardai.

Meanwhile, a 4X4 belonging to a dairy farmer in Co. Waterford was stolen on Friday last (February 23), as the owner worked less than 100 yards away.

The short-wheel base (SWB) Toyota Land Cruiser was stolen at approximately 5:15pm on the evening in question from a farmyard located in the Ballykinsella, Tramore region of the county.

The 4X4 is black in colour and its registration is 06-WD-7. The vehicle was parked in the farmyard – which has electric gates – as the farmer went about his work.

Speaking to AgriLand, he said: “I was just going to lock up the cows when I saw it driving past. It went down a cow path and out onto the road. I ran down after it and rang the Gardai straight away.”

The farmer is asking people to keep an eye out for the stolen 4X4. Anyone who has information on its whereabouts or who may have seen it over the weekend is asked to contact Tramore Garda Station on: 051-391620.