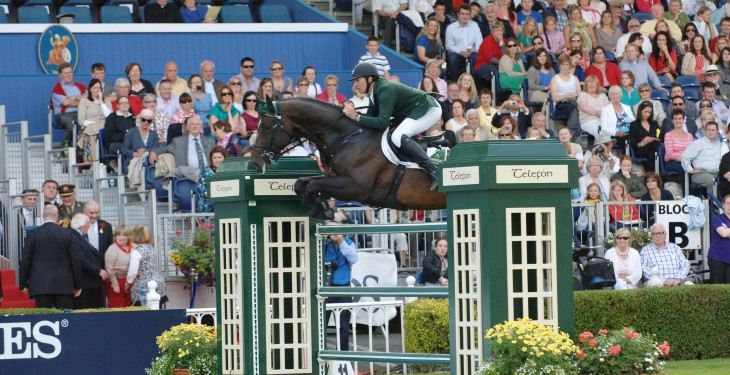 It’s showtime! The 140th Discover Ireland Dublin Horse Show started this morning and is set to be the highlight of the sporting and social calendar in Dublin this summer.

The show opened to the public at 9am and will be officially opened at 12 noon by the new Lord Mayor of Dublin, Councillor Oisín Quinn, who will arrive at the RDS show grounds in the spectacular Lord Mayor’s Coach.

This year, the Discover Ireland Dublin Horse Show has a prize fund of more than €942k and promises to be even bigger and better than ever.  There are 125 classes, attracting a top class field of entries for the showing and jumping competitions and the award of an RDS rosette will be highly coveted.

Five of the top 10 riders in the Longines World Rankings* will be competing at the Show including, world No. 2 Elizabeth ‘Beezie’ Madden from the USA, world No 3 Kevin Staut from France and world No 5, Marcus Ehning from Germany.  The current world champion, Philippe Le Jeune from Belgium will also be competing at the show.

There are eight nations taking part in the 2013 Furusiyya FEI Nations Cup™ presented by Longines competition on Friday, August 9. They are: France, Germany, Great Britain, Ireland, Netherlands, Spain, Ukraine and the US.

RDS Chief Executive Michael Duffy said: ‘The RDS show grounds is a hive of activity with not only the arrival of over 1,400 horses and ponies but also more than 300 trade exhibitors putting the finishing touches to their displays.  The Main Arena is being set-up for the first of 14 international competitions including the gripping Land Rover Puissance, the Nations’ Cup and the Longines International Grand Prix.

“The show is a veritable feast of entertainment, from the style and glamour of Blossom Hill Ladies’ Day on Thursday to the excitement of the Pony Club Games on Saturday and Sunday. The RDS is delighted to welcome both the Osborne Scurry Racing Group and internationally renowned natural horseman, Honza Blaha to the Show. Both will provide an added dimension to the Main Arena programme next week and we look forward to welcoming visitors to another wonderful five day show.”

Park & Ride facilities are available for all visitors attending the show. They are located in Muckross College, Donnybrook and the UCD Campus in Belfield.  A shuttle bus service operates at 15 minute intervals from 7am – 9.30pm daily, with the last bus leaving the RDS at 9.15pm each night. Visitors are advised to use public transport if possible as parking in the Ballsbridge area will be limited.

Image: Leading Irish Rider during the FEI Nations Cup in Dublin was Clem McMahon on Pacino, he was one of only three riders to jump a double Clear, pictured last year. Image Tony Parkes